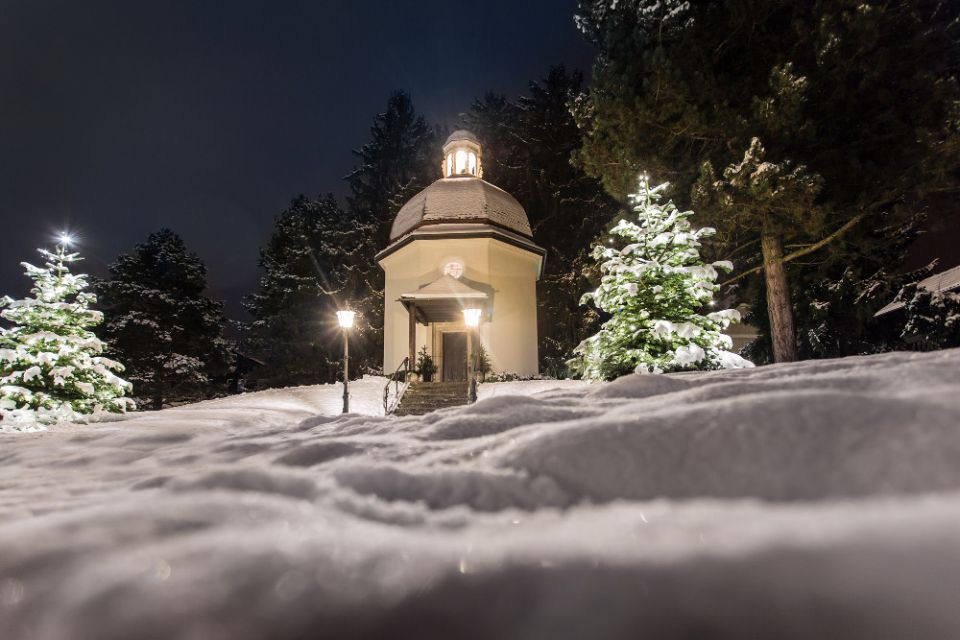 The Silent Night Chapel, which is in the town of Oberndorf in the Austrian state of Salzburg, is a monument to the Christmas carol "Silent Night." The chapel stands on the site of the former St. Nicholas Church, where on Christmas Eve in 1818 the carol was performed for the first time. (CNS/courtesy www.stillenacht.com)

Washington — Exactly 200 years ago this Christmas Eve — Dec. 24, 1818 — in a little church in what is now Austria, the world heard for the first time a poem set to music that eventually would be hailed as one of the most popular and beloved Christmas carols of all time.

"Silent Night" was sung for the first time that Christmas Eve at a midnight Mass at St. Nicholas Church in Oberndorf, a village in the Austrian Empire. The lyrics were written by a young Catholic priest, Fr. Joseph Mohr, and the music was composed by Francis Xavier Gruber, an organist and school master.

There is a popular legend that "Silent Night" was composed because the organ at Mohr's parish church, St. Nicholas, was broken.

According to the story, the priest wrote the lyrics to "Silent Night" — "Stille Nacht" in the original German — and asked Gruber to compose the tune for guitar so that there would be music at the midnight Mass.

This was all supposed to have transpired during the day of Christmas Eve of 1818, just hours before the carol was to be performed for the first time.

The truth is a little less dramatic.

Mohr wrote the poem "Stille Nacht" in 1816 in the Austrian town of Mariapfarr, near Salzburg. Two years later, while serving at St. Nicholas Parish in Oberndorf, the priest asked Gruber to compose a melody for the words. It is not known why Mohr wanted to set his poem to music. Gruber composed the music and "Silent Night" did indeed premiere at the Christmas Eve Mass.

The fact that the song was performed in German at the Mass would not have been uncommon or unusual in the Austrian Empire at that time, according to Sara Pecknold, professor of practice in the history of sacred music at The Catholic University of America in Washington.

"The vernacular (the language of a particular country or region) was being used in the liturgy. Even at a sung high Latin Mass, it would have been common to use German (in the Austrian Empire) in the songs," she said.

This, she said, was partially due to the influence of Joseph II, the Holy Roman Emperor who died less than 30 years before "Silent Night" was composed, and who defied the papacy and simplified the Mass and decreed other liturgical reforms in his empire.

"He certainly limited the splendor of the Latin Mass with an austere and almost Calvinistic approach to worship," Pecknold told the Catholic Standard, newspaper of the Washington Archdiocese. "So it certainly would have been proper to have a hymn sung in German accompanied by a guitar."

The carol eventually spread its way from the small village to other parts of the Austrian Empire and eventually to the rest of the world. The attraction to the carol comes from "it's blend of the particular and the universal," Pecknold noted.

Mohr's poem, "Stille Nacht," was written "in the wake of tumultuous activity," Pecknold said. "The Napoleonic Wars were still fresh in everyone's mind, so to write a poem about stillness and peace certainly makes sense. And it speaks about the universal peace that Christ brings to all people."

The tune composed by Gruber "is interesting because it is not very sophisticated, but composed in a very folksy style. It is basically a simple tune with a folksy, pastoral setting and an undulating melodic swing. It is not too difficult to sing," Pecknold said.

The carol's fame — and popularity — in the United States is due in a large part to the Rainer Family Singers, a popular early 19th-century group of traveling singers from Austria who performed the song as part of their repertoire. It is believed the group brought the song to this country during their 1839 tour here.

"Stille Nacht" was translated into the English "Silent Night" by an Episcopal priest, the Rev. John Freeman Young.

According to the Stille Nacht Association, an Austrian-based organization dedicated "to make the song, its origin and its message resonate in the hearts and minds of locals and visitors from all over the world, "the carol is universally beloved.

"By the turn of the (20th) century 'Silent Night' was being sung on all continents, brought to the far reaches of the globe by Catholic and Protestant missionaries. Today we are aware of translations into more than 300 languages and dialects," the organization notes on its website.

The carol is believed to have caused a somewhat miraculous and well-documented Christmas truce during World War I.

On Christmas Eve 1914, British and French troops were encamped in trenches in a faceoff against German troops in Ypres in Flanders, Belgium. The two sides began singing Christmas carols to each other, and "Silent Night" was the only song all the combatants knew.

Singing the song together broke the ice and led to a temporary cease-fire with soldiers from both sides meeting in the middle "No Man's Land" to trade tobacco and candy, play soccer and sing carols. 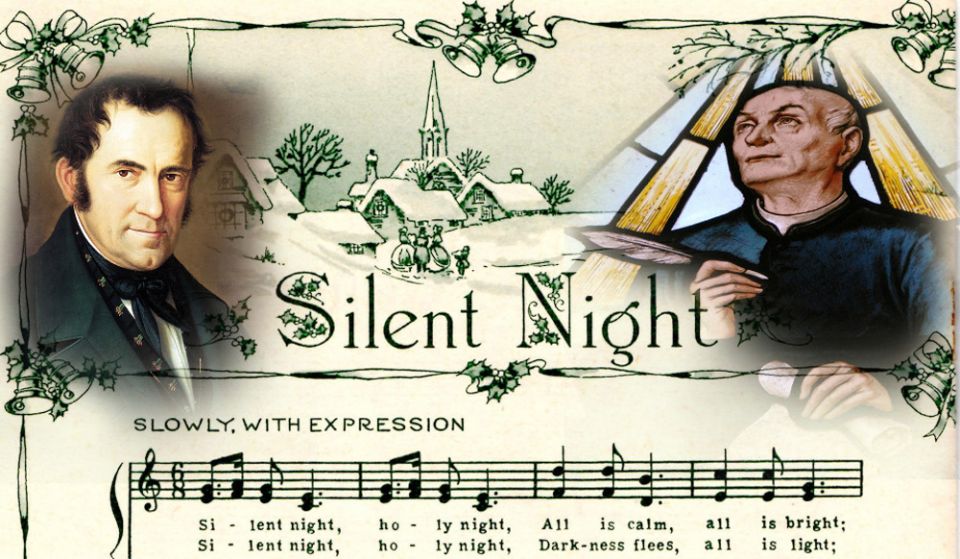 A stylized score of "Silent Night." On the left is Franz Gruber, the composer of “Silent Night,” in a portrait by Sebastian Stief. On the right is a stained-glass window of Joseph Mohr, the author of the “Silent Night” poem, at the Silent Night Chapel in Oberndorf, Austria. (Images courtesy of Creative Commons)

As it marks its 200th anniversary, "Silent Night" remains as popular as ever. Bing Crosby's 1935 recording of the carol is the third biggest-selling single record in history; his 1942 recording of "White Christmas" holds the No. 1 spot.

A Time magazine survey found the song to be the most recorded Christmas carol, with "Joy to the World" a distant second. In 2011, the UNESCO declared "Silent Night" an honored part of "our intangible cultural heritage."

A 2016 worldwide survey of choral directors found "Silent Night" to be one of the 25 greatest Christmas carols of all time.

[Richard Szczepanowski is managing editor of the Catholic Standard, newspaper of the Archdiocese of Washington.]

God with us: In Catholic faith, the Incarnation is not an abstraction