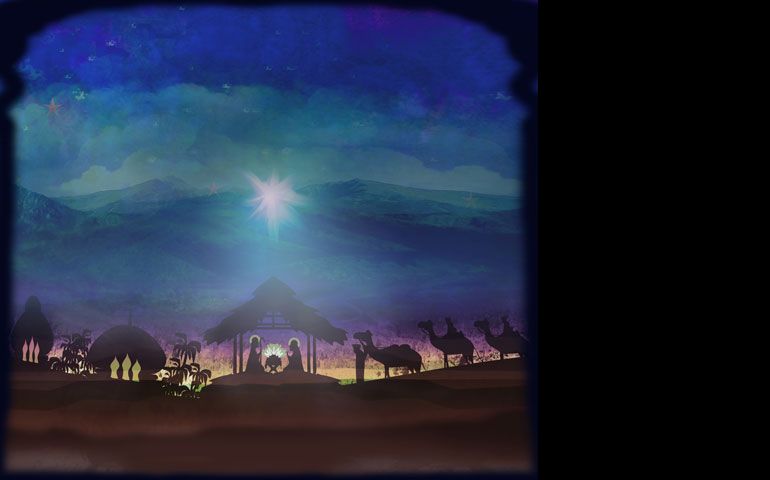 (Dreamstime)
This article appears in the Christmas 2015 feature series. View the full series.

At 6 p.m. on an unusually mild Christmas Eve, I parked my tan Ford Escort next to Ellen's red one outside a pizza parlor in downtown Syracuse, N.Y. Standing in slushy snow, we opened our hatchbacks and watched as two young kids in stained aprons loaded enough pizzas for the entire inmate population of the Syracuse jail.

A few minutes later, a cadre of mostly grey-haired volunteers met us at the jail door and carried our treasure though the door, down the hallway, past the sally-port window, through three sets of clanging gates, into the urine-scented inmate elevator, down to the grimy, cockroach-inhabited kitchen. Ellen and I unboxed the pizzas, slid them into ovens, set dials on "warming," and took the elevator to the second floor.

Bill presided, a simple stole around his neck. Tim played guitar. About 30 gray-clad inmates, including Howard, I noticed, stood with hymnbooks in their hands. Volunteers stood behind them, and a blue uniformed guard in each back corner.

A wave of peace filled the dusty air around us. The romantic in me saw the long-ago mysterious cave at Bethlehem; the realist in me saw the steel cages in Syracuse. "May love descend on both," I prayed.

As the Mass ended, Ellen and I slipped out and returned to the kitchen. We found the long black trays that are part of every institution's kitchen and put them on the multistained wooden worktables. We pulled the pizzas from the ovens and slid them onto the trays. Volunteers arrived to carry them to the elevator and up to four tiers, where they would put generous slices on paper plates and slide them through steel bars to expectant inmates.

Though not everyone came to Mass, though not everyone celebrated Christmas, everyone loved the plain cheese pizza offered by the jail ministry. Yes, it was served with not very cold soda in paper cups, but nothing, the volunteers told us, dampened the mood upstairs.

Our task completed, Ellen and I neatened things up as best we could, and took our trash out to her car. The inmates upstairs were now reaching through the bars for their presents: cigarettes and candy, socks and shampoo, stamps and soap, unwrapped, of course.

I hugged Ellen goodbye, climbed into my car and started on my way to my family's Christmas gathering across the state in Valatie, 150 miles east and south of Syracuse. Luckily, the roads were mostly clear of snow.

I drove down Erie Boulevard to 690 and then to the Thruway entrance. Taking my ticket, I noticed the word "FOG" in big letters on the tollbooth's side map: mild night, snow on the ground, equals fog, already starting around me and soon thickening with each mile.

By the time the Mohawk River started to border the road, visibility was "pea soup" poor. I navigated by the white line on the road's edge and the dim lights of the few cars out with me. Signage was blurred, sometimes invisible.

I just kept driving, slowly, steadily, eyes on that blessed white line. No car radio to keep me company, to relax my taut, alert body. I sang Christmas carols. I thought about getting off at a rest stop, but didn't. I thought about my mother and my sister and her family waiting in Valatie. Did they know about the fog?

I thought of Howard, having his first Christmas in prison.

Howard was my first assignment as a jail ministry visitor advocate. He, they told me, had murdered his sister-in-law. As I left the visitors' elevator at Howard's tier for our initial visit, the correctional officer shouted out, "Why do you want to see this guy, sister? He's a murderer." I winced, partially from anger, partially from fear.

A few minutes later, I sat across from Howard at a small table in a closet-size visiting space. Howard was confused, frightened, weeping. That he was in jail made no sense to him at all. Why had they taken his wedding ring? Why didn't his wife come to see him, and bring their two children? Why would he murder his sister-in-law?

I learned the backstory. Howard was raised in a Catholic family, graduated high school, worked the same factory job with decent wages as he married, bought a house, had two children. Jail was a foreign country; his jail mates, aliens.

In the recession, he lost his job, couldn't find work, couldn't support his family, started using drugs, and early one morning murdered his sister-in-law as she lay in her bed. His weapon was a baseball bat.

For good or ill, Howard did not remember what he did. Neither did he conceal the evidence afterward, thus his arrest, indictment and imprisonment to await trial.

Then the prosecutor brought in a hypnotist and Howard remembered everything. Now he was quiet, very quiet, when I saw him each week. His supporters, his loyal but distraught mother especially, held onto hope that circumstances would merit the shortest sentence a judge could impose. That was my hope also. My fervent hope.

My three-hour drive home took four and a half though unrelenting soupy fog as I traveled the Thruway to Albany, onto 87 north, then 90 east.

Just before midnight, I pulled off Interstate 90 onto Route 9 south — just three miles from home. Finally, I saw dimly the outdoor holiday lights on the brick ranch house. I looked up at the lighted star my brother-in-law always attached to his ham radio antenna. Home.

As I turned into the driveway, my sister came out. She had kept vigil and, yes, had kept my plan to come home that night a secret from our sleeping mother. Connie took my suitcase while I carried two shopping bags of presents and into the house we went.

There in the living room, an oversized and overdecorated tree surrounded by an overflowing mound of way too many colorfully wrapped presents — my family's typical way of celebrating Christmas — welcomed me.

As did my toddler niece, who somehow awakened just then to appear in the doorway in her white nightie. My guardian angel, to be sure.

"Merry Christmas to all," I prayed, as the night before Christmas ended.

[Sr. Francine Dempsey belongs to the Sisters of St. Joseph of Carondelet, Albany, N.Y. She is a retired educator and longtime justice advocate.]

Clarification and note from the editor

St. Joseph Sr. Francine Dempsey wrote this lovely essay, "On a foggy Christmas Eve," for our In our Dec. 18-31 Christmas issue and it was posted online Dec. 23.

One detail the story did not include, but should have, is that Dempsey's reflection was based on her experience in the Syracuse, N.Y., public safety building, i.e., the jail, in the early 1980s. Because we were not clear about that time frame, readers may have been led to believe the reflection was from a more recent experience, and that is unfortunate.

Dempsey's description of the jail facilities was of a building that no longer stands. Conditions in the current Onondaga County Justice Center, as the facility is now known, are much improved, I am told by Keith Cieplicki, coordinator of the Syracuse jail ministry. Cieplicki contacted me after he saw Dempsey's essay. He wrote:

As the coordinator of jail ministry in the Syracuse jail since 2011, I can assure you that the facility is run with the highest standards of cleanliness and care. … The Onondaga County Justice Center has one of the most unique and innovative programs in the country through its partnership with Jail Ministry. It is one of many programs that other facilities would benefit greatly from.

For the staff and the leadership of the Onondaga County Justice Center, the article creates a very mistaken representation of the facility and the quality of the work there.

When I called Dempsey to discuss Cieplicki's letter, she immediately agreed that we should have identified the date of her memory and she eagerly encouraged me to write this note of clarification. I hope this helps correct any misperceptions the essay may have caused.

One more footnote to this story. Talking to Dempsey, I learned that through serendipitous happenstance, she met up again with Howard. He was paroled in 2013, has completed a post-prison rehabilitation program, and is now working with ex-convicts himself.

Perspective | On a foggy Christmas Eve

When it comes to prayer, there is no room for individualism, pope says

Editorial: Francis' advice is good for the church