Climbers exist inside the church, too, pope says 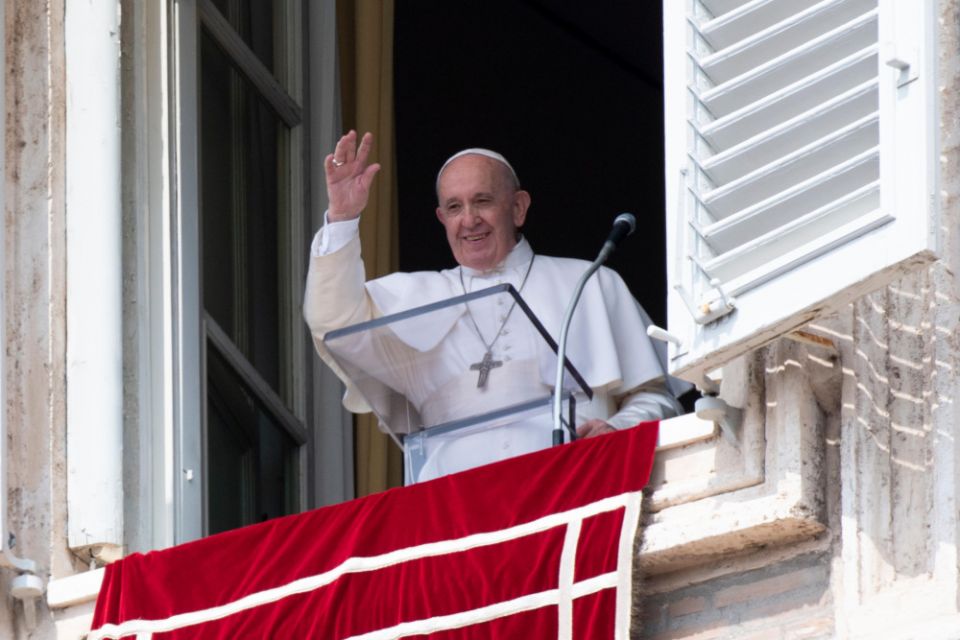 Pope Francis greets the crowd as he leads the Angelus from the window of his studio overlooking St. Peter's Square at the Vatican Sept. 1, 2019. (CNS/Vatican Media)

People who race to get top positions often feel superior to others, an attitude that destroys the possibility for fellowship and communion, Pope Francis said.

"We all know these people: climbers, always trying to climb up, up. They hurt brotherhood, they damage brotherhood," the pope said Sept. 1 during his Sunday Angelus address.

Thousands of pilgrims waited outside St. Peter's Square to listen to and pray with the pope. However, the pope was late, which is unusual for his Angelus appointment.

Excusing himself for the delay, the pope explained that he was stuck in an elevator for almost a half-hour.

"Thank God the firefighters came -- I thank them very much -- and after 25 minutes of work they were able to get (the elevator) working. An applause to the firefighters," he said.

In his address, the pope focused on the Sunday Gospel reading in which Jesus recounts two parables while dining at the house of a leading Pharisee.

Noticing how many guests rushed to take the place of honor at the table, Jesus exhorted them to be humble and take the last place because "everyone who exalts himself will be humbled, but the one who humbles himself will be exalted."

The pope said that the desire to rise to the top in both "civil and ecclesial" circles happens even today "and not just when someone is invited to lunch."

Instead of seeking to be first, the pope added, Christians are called to follow Christ who "always shows us the way of humility" because it is "the most authentic one that also allows us to have authentic relationships."

In the Gospel reading, Jesus also encourages his host to invite the poor, the lame and the blind to his banquet so that he may receive "a divine reward that is much greater" than giving and receiving favors from others, which "usually distorts relationships and commercializes them," the pope said.

"Humble generosity is Christian," Francis said. "Jesus invites us to selfless generosity, to open the way for a much greater joy, the joy of being part of the very love of God that awaits us, all of us, in the heavenly banquet."

After praying the Angelus prayer, the pope announced that he will create 13 new cardinals from around the world Oct. 5, including Canadian Jesuit Father Michael Czerny, undersecretary of the Section for Migrants and Refugees at the Dicastery for Promoting Integral Human Development.

Francis also commemorated the World Day of Prayer for the Care of Creation, an observance begun by the Orthodox Church and now celebrated by many Christians.

The ecumenical day of prayer, he said, "is a favorable time to praise God for all his creatures and the assumption of responsibility in front of the cry of the earth."

Spirituality | Climbers exist inside the church, too, pope says