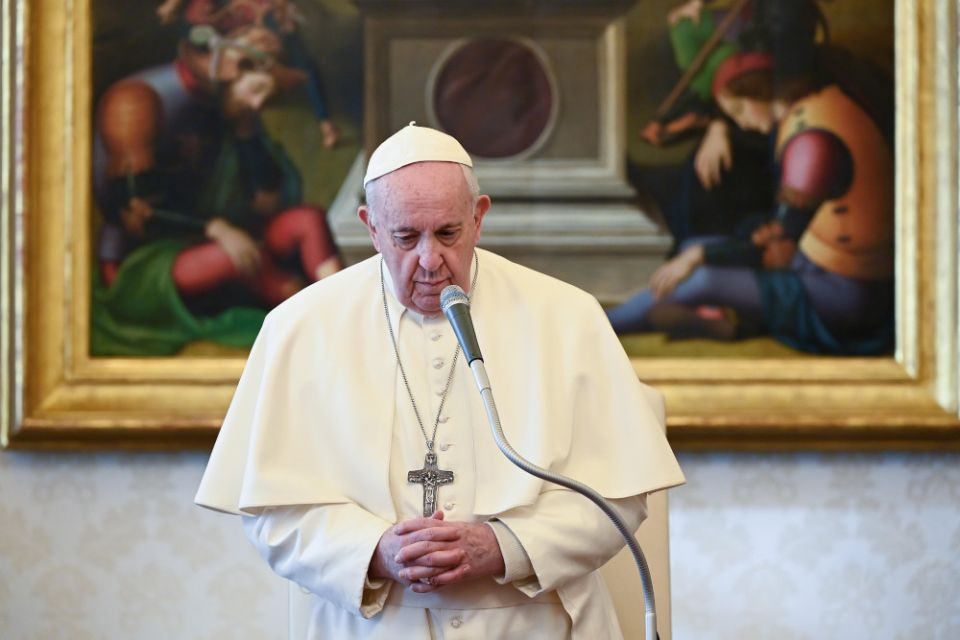 Pope Francis leads his general audience in the library of the Apostolic Palace at the Vatican Jan. 27, 2021. The pope continued his series of talks on prayer, reflecting on the theme "Praying with Sacred Scripture." (CNS photo/Vatican Media)

Vatican City — Praying with Scripture is not meant to be a mindless repetition of biblical quotes but instead is a gift that is meant to be accepted in people's hearts, Pope Francis said.

During his weekly general audience Jan. 27, the pope said the words contained in Scripture were "not written to remain imprisoned on papyrus, parchment or paper, but to be received by a person who prays, making them blossom in his or her heart."

He also said Christians must not exploit the Bible or use it for "ulterior motives" like justifying "his or her own philosophical and moral view."

"It irritates me a little when I hear Christians who recite verses from the Bible like parrots: 'Oh, yes, the Lord says (this), he wants this,'" the pope said, departing from his prepared remarks.

Livestreaming his audience from the library of the Apostolic Palace, the pope continued his series of talks on prayer by looking at how Christians pray with Scripture.

"The Bible was not written for a generic humanity, but for us, for me, for you, for men and women in flesh and blood, men and women who have a name and a surname, like me, like you," he said.

The Christian tradition of "Lectio Divina," reflecting on and praying with the biblical readings, allows Christians to enter "into dialogue with the Scripture," he said. And recognizing oneself in a particular passage, biblical character or situation "is a grace."

However, he added, praying with Scripture is "delicate" because those who pray "must not slip into subjective interpretations" but instead be united to Scripture and view it as "an icon to be contemplated."

Pope Francis said the word of God "inspires good intentions," gives strength and serenity to those in need and "even when it challenges us, it gives us peace."

"On 'weird' and confusing days, it guarantees the heart a core of confidence and of love that protects it from the attacks of the evil one," he said.

Spirituality | Pope: Scripture not meant to be stuck on paper but fixed in one's heart

Lent requires us to lean into God, embrace the missing pieces