by Cindy Wooden, Catholic News Service
Spirituality
This article appears in the Francis in Thailand and Japan feature series. View the full series. 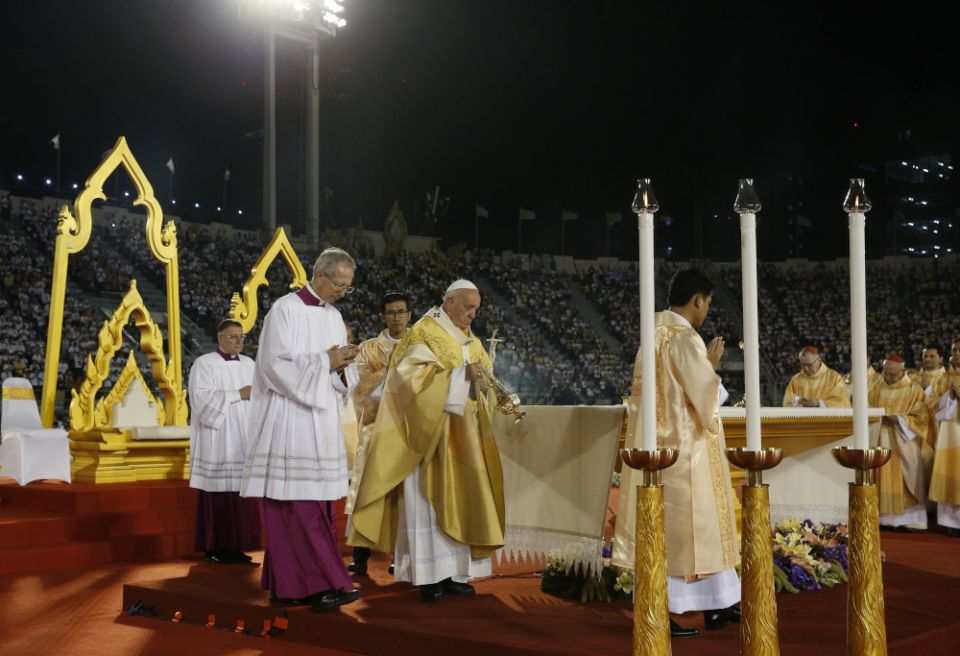 Bangkok — Missionaries are not mercenaries, but beggars who recognize that some brothers and sisters are missing from the community and long to hear the good news of salvation, Pope Francis told the Catholics of Thailand.

Celebrating Mass Nov. 21, the feast of the Presentation of the Blessed Virgin Mary, in Bangkok's National Stadium, Francis looked at the meaning of what he calls "missionary discipleship."

Francis' visit was part of the celebrations of the 350th anniversary of the establishment of the Apostolic Vicariate of Siam Mission, the first Catholic jurisdiction in what was to become Thailand.

In his homily, the pope said the early missionaries realized "they were part of a family much larger than any based on blood lines, cultures, regions or ethnic groups," and, empowered by the Holy Spirit, "they set out in search of family members they did not yet know."

The missionaries didn't see the Thai people as pagans or nonbelievers, but as brothers and sisters, the pope said. And they did not just want to share the Gospel with the Thai people, but wanted "to receive what they needed to grow in their own faith and understanding of the Scriptures."

"A missionary disciple is not a mercenary of the faith or a producer of proselytes, but rather a humble mendicant who feels the absence of brothers, sisters and mothers with whom to share the irrevocable gift of reconciliation that Jesus grants to all," the pope said.

Francis said he came to Thailand for the anniversary not to encourage some kind of nostalgia for the past, but to help spark "a fire of hope" to help Catholics today reach out to others with the same "determination, strength and confidence" the early missionaries had.

The anniversary, he said, should be "a festive and grateful commemoration that helps us to go forth joyfully to share the new life born of the Gospel with all the members of our family whom we do not yet know."

Those family members, the pope said, include the "children and women who are victims of prostitution and human trafficking, humiliated in their essential human dignity," and deserving of God's love and promise of salvation.

They also include "young people enslaved by drug addiction" and "migrants, deprived of their homes and families, and so many others, who like them can feel orphaned, abandoned," but deserve a family and a helping hand, Francis said.

"All of them are part of our family," the pope said. "They are our mothers, our brothers and sisters. Let us not deprive our communities of seeing their faces, their wounds, their smiles and their lives. Let us not prevent them from experiencing the merciful balm of God's love that heals their wounds and pains."

"A missionary disciple knows that evangelization is not about gaining more members or about appearing powerful," the pope said. "Rather, it is about opening doors in order to experience and share the merciful and healing embrace of God the Father, which makes of us one family."

Pauline Sister Maria Parichat Jullamonthon, a member of the communications team for the papal visit, said that for her, the first thing isn't to bring her Buddhist neighbors into the Catholic Church, "but to share with them the values that will make peace and harmony."

"To be a missionary is to go out and love," she said.

Deacon Paul Loonubon, 29, a seminarian for the Diocese of Udon Thani, said his country is fortunate to have the pope visiting. "The pope gives the world peace, and he gives peace to my heart."

Earlier in the day, the pope visited St. Louis Hospital, which Catholics have been operating since 1898.

Before touring the hospital and visiting dozens of patients, Francis spoke to about 700 doctors, nurses and other staff members in the hospital auditorium.

Where Catholics are tiny minority, and even where they aren't, the pope said, "it is precisely in the exercise of charity that we Christians are called not only to demonstrate that we are missionary disciples, but also to take stock of our own fidelity, and that of our institutions, to the demands of that discipleship."

Catholic doctors, nurses, hospital staff and volunteers have a unique opportunity to see and honor "the sacred grandeur" of the human person and to recognize God present in each one, he said. They welcome and embrace "human life as it arrives at the hospital's emergency room, needing to be treated with the merciful care born of love and respect."

In treating patients, he said, the doctors and nurses carry out "a powerful anointing capable of restoring human dignity in every situation, a gaze that grants dignity and provides support."

Francis called the hospital's work "a living testimony of the care and concern that all of us are called to show to everyone, especially the elderly, the young and those most vulnerable."

Church must recognize the gifts of older Catholics, pope says

Mission is to make disciples for Christ, not for one's group, pope says