Pentecost: Uncaging the spirit, uncaging ourselves 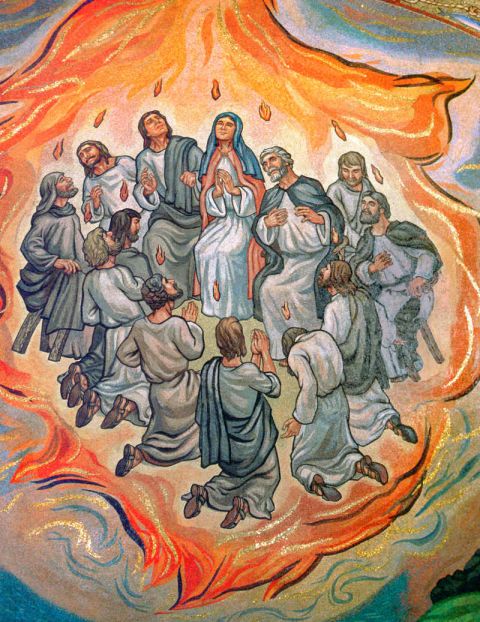 An artist's depiction of a scene from the Pentecost appears in the Cathedral Basilica of St. Louis in the city of St. Louis. (CNS photo/Crosiers)

Christian churches around the world celebrate Pentecost, the feast of the gift of the Holy Spirit, as the launch of the Christian mission. I am afraid, however, that through the centuries, Christian churches have too often softened and domesticated our understanding of the Spirit. A lovely, tame Spirit we too often imagine Her to be, the gentle Dove of Peace.

In a typical way of referring to the Trinity in the Catholic community — Creator, Redeemer, and Sanctifier — She is, of course the Sanctifier. For many of us, that title carries subliminal images of individual interior prayerfulness, goodness, peacefulness, humility, wise discernment, piety — the widely assumed traditional qualities of a “saint” living faithfully in prayerful hope of eternal life with God in heaven.

The list of the Gifts of the Holy Spirit that we have grown up with and teach our children continues that focus on peaceful personal interiority: wisdom, understanding, counsel, fortitude, knowledge, piety, and fear of the Lord. As do the Fruits of the Holy Spirit: charity, joy, peace, patience, benignity, kindness, long suffering, faith, modesty, continency and chastity [with apologies for the fallibility of my grade school memory of the Baltimore catechism rendition].

But as we remember and celebrate Pentecost, we have to ask: What happened to the wild energy and huge, noisy, demanding Spirit that caught the attention of thousands of people in Jerusalem and drew them to the place where the apostles were that Pentecost morning? Where is the Holy Spirit who set these disciples so on fire that they couldn’t stop speaking out, excited about the Good News that was turning their lives upside down — and that resulted that day in 3,000 people joining the community?

What happened to the Holy Spirit’s propensity for breaking boundaries and shedding religious customs and laws in order to reach out to everyone? She was way out ahead of the disciples, drawing them beyond Jerusalem and their self-understanding as a Jewish reform movement. Recall how She worked with Cornelius and his family and got them together with Simon Peter — and then got him through the blowback he received from his scandalized community. She transformed the antagonistic crusader Saul into the fiery Paul, apostle to the Gentiles, and accompanied him through his travels and trials, guiding his strategies. Again and again in the Acts of the Apostles, we find Her leading a fearful Christian community beyond its comfort zone to take the Good News to the whole world and, as Jesus, at the end of the Gospel of Mark commissions them, to preach it “to every creature.” [Mark 16:15]

That’s the Holy Spirit I see at work among us this Pentecost as an interfaith network launches the Poor People’s Campaign: A National Call for Moral Revival with 40 Days of Nonviolent Action in more than 30 states and Washington, D.C., to call attention to the struggles of 140 million people in the U.S. living in poverty and to demand, in the name of religious faith, an end to systemic racism and poverty, ecological devastation and the war economy. It will culminate in a Global Day of Solidarity with a mass rally in Washington.

That’s the Holy Spirit I recognize in the broad ecumenical coalition of Christian churches, in a campaign they have named Reclaiming Jesus, calling for a Confession of Faith in a Time of Crisis to reject an America First philosophy as a theological heresy and show the world that followers of Jesus refuse to be complicit.

She still works in the interior realm of individual’s lives, but when She does it in thousands and millions at once, guiding them in the work of justice and healing, it can become a wildfire for social transformation. Then descriptions of Her as Sanctifier or Consoler, while still true in a way, are far too weak, too tame — and misleading. It is far more accurate and exciting to see Her as the Inspirer, the Energizer and Organizer, the wise and powerful Prophetic Force. As a Dove of Peace, She is fully uncaged, enraged at the injustices and violence everywhere, and relentlessly engaged in the hard, everyday work of peace-building our times demand.

My only disappointment is in not seeing the Catholic community standing up and speaking out more as an active participant in these movements. Sincere thanks to Sr. Simone Campbell of NETWORK for standing with the Revolutionary Love movement behind the Poor People’s Campaign and Fr. Richard Rohr for speaking out as part of the leadership of the Reclaiming Jesus campaign. But as the only two visible Catholics in these important developments, they are far too isolated.

It is time for the rest of us in the Catholic community to let the true Holy Spirit, Who doesn’t honor the limited “cages” in which we unconsciously enclose Her, to uncage our imaginations and move into action in response to the sacred and redemptive movements of God in our world today.

Pentecost Sunday: The power of the Spirit