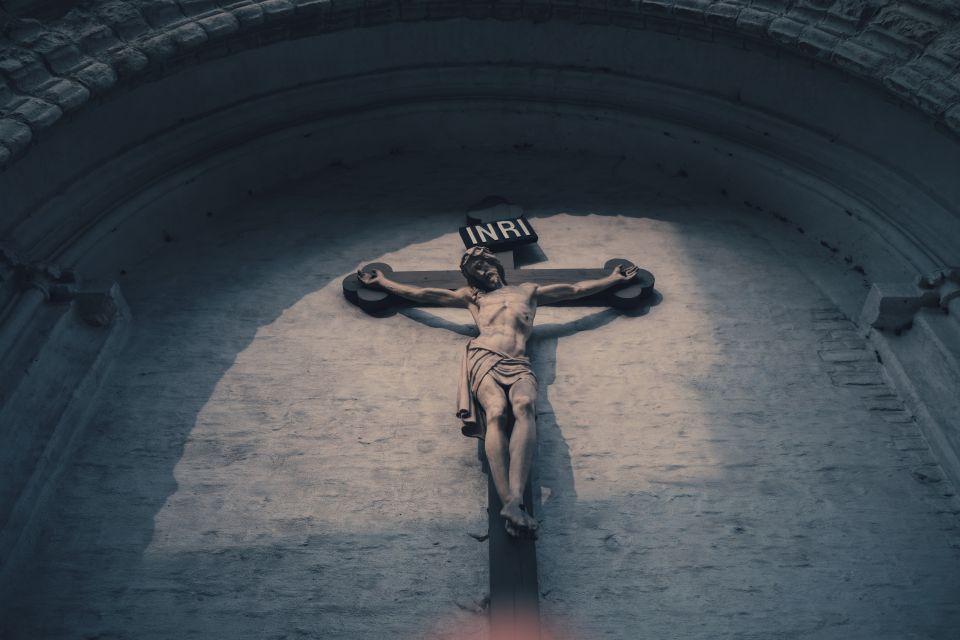 I think most of us like this Gospel, especially the final part where Jesus says to Thomas, "You believe because you've seen." But then he goes on to say, "But blessed are those who have not seen but still believe." We like this because it refers to all of us. We haven't had that privilege that Thomas had to actually touch the risen body of Jesus, and yet we believe; and what a blessing it is that we do. So we give thanks to God for our faith today.

But then also we need to reflect further on this Gospel lesson because at the beginning of the Gospel, when Jesus first speaks to the disciples on this Easter Sunday night, he does a marvelous thing. You remember that they've gathered now and they're in hiding; they're afraid. Partly because as John says in the Gospel, "The Jewish leaders might try to do to them what they did to Jesus." So they are afraid, but also they're lost since Jesus has gone. But then suddenly he's there in their midst.

What's the first thing he says to them? "Peace be with you." That word "peace" means not just no conflict, it means not being afraid, nothing to fear, I'm here. Jesus brings to them a gift. You remember how generous this is. They had run away, they had hidden, they had lied about him. Peter said, "I don't even know the man." Judas betrayed him and all the rest ran away except for the one disciple, John. Yet Jesus immediately brings them peace, forgiveness, and love, reconciliation.

Then he does something extraordinary: He breathed on them. It would be like in this church Jesus somehow breathes on all of us. What does that call to mind? The book of Genesis when God had formed (according to the book of Genesis and the myth about the creation) the body of man and God breathed spirit life into that person, into the human race. God in Jesus is now breathing on these disciples making them God's new people. He gives them a mission: "As God has sent me, I send you." He's forming the church. God has breathed on us. God gives us the same mission: "As God has sent me, I send you."

What's the mission? "Those whose sins you forgive; they are forgiven." You're driving away evil. He goes on to say, "The evil you restrain, it is restrained." So he's giving us a task to overcome evil in our world, the evil of sin — any kind of sin, every kind of sin. God forgives us and asks us to keep on trying to push sin out of our world, out of our human family, and restrain any other evil from coming. Those first disciples began to carry this out.

That's what we hear about in the account from the Acts of the Apostles, which is our first lesson today, where St. Luke describes that early Christian community in a very marvelous way: "The whole community was one in heart and mind. No one claimed ownership of possessions, but rather they shared all things in common. They gathered together in prayer at the temple. There was no needy person among them for those who owned things sold them, brought the proceeds of the sale to the apostles, laid it at their feet, and the apostles distributed according to everyone's need."

That's an idealistic picture of the early church. It probably never really got that complete where they shared everything and no one was in any kind of need, but at least that's the ideal. God has given all of us many gifts, but God expects us to share with others. That's material gifts, spiritual gifts — whatever. As I think about what Jesus was asking those disciples to do when he breathed on them and gave them the Holy Spirit to restrain evil and forgive sin, he's asking the same thing of us. That is one of the ways in which we could do this: Try very hard to be generous so that we share the gifts that we have.

There's one thing that comes to my mind right now, I've thought about it, and that is what's happening with the people who are fleeing from violence, poverty, killing, from the country of Honduras in Central America. They've been traveling away from that country in a caravan of about 1,000 people, some intending to come to our country, but not all of them. But they need to flee from the violence that is being perpetrated against the ordinary people, the poor of that country. They're starving. What do we hear? Build a wall! Keep them out! Now we're going to send troops like they're criminals out to destroy us.

Over three quarters of them are children and women, and yet we want to send troops to protect our border from these people. How wrong that is, especially when you consider the ideal that is set up for us in the first lesson today and when you remember that Jesus has breathed upon all of us and given us the command to forgive sin, rid the world of sin, restrain evil, bring goodness, forgiveness, mercy and love and reconciliation into our individual lives, into our families, into our communities, and into our world.

Receive the Holy Spirit and he breathes on us, gives us that spirit, and now he expects us to carry on his work, a work that brings God's goodness and love into every part of our human family. That's the challenge that Jesus has given to us as we recall the events of that first Easter Sunday night. Now Jesus is saying to you and to me, receive the Holy Spirit, forgive sin, restrain evil, and bring God's love into the forefront of our world.

[Homily given April 8, 2018 at St. Philomena in Detroit, Michigan. The transcripts of Bishop Thomas Gumbleton's homilies are posted weekly to NCRonline.org. Sign up here to receive an email alert when the latest homily is posted.]

Column | Receive the Holy Spirit and he breathes on us