We have to take seriously our role as shepherds 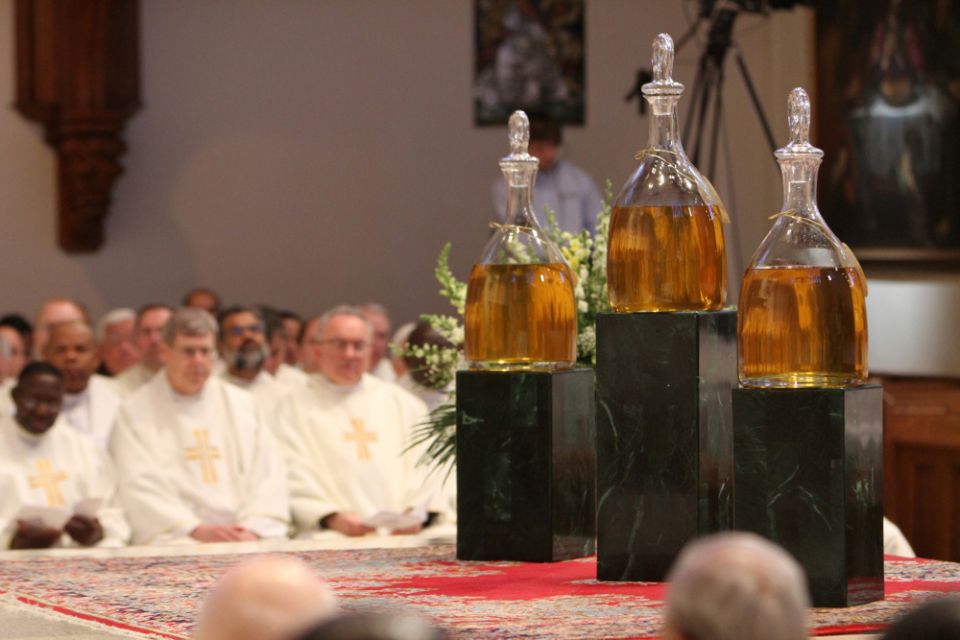 Vessels containing sacred chrism oil, the oil of the Sick and the oil of catechumens are displayed in the sanctuary of St. Agnes Cathedral in Rockville Centre, New York, during the annual chrism Mass in 2014. (CNS/ Long Island Catholic/Gregory A. Shemitz)

You may recall that the last couple of Sundays, the scripture lessons have focused on the ministry of prophecy, how Jesus himself was a prophet sent by God, and John the Baptist preparing the way for Jesus. But then going back, the whole long history of the chosen people — they were guided by prophets. In reflecting on that, I ask people to call to mind what happened at our baptism when each one of us was anointed with chrism and the priest announced, "God now anoints you with the chrism of salvation. As Jesus was anointed priest, prophet and king, so may you live always as a member of his body."

Those last couple of Sundays, I focused on reflecting on the idea of our being prophets. Most people find it kind of intimidating. I'm going to be a prophet like Jeremiah, like Isaiah, like Elijah, like John the Baptist? Well, yes, that's what God is saying. Each of us is called to be a prophet. A prophet is someone who proclaims the message of God. Mainly, that message is that God loves us and he never stops loving us and where there is love there is God. So our prophecy is, most of all, trying to make our love for one another clear, manifest, so that it really does speak God's presence.

But now in today's lesson, we're being reminded that we're also called to be a king or ruler. In the Hebrew language, the word for shepherd and ruler or king is the same word. When Jeremiah, in the first lesson today says, "Woe to the shepherds who mislead and scatter the sheep of my pasture! Woe to them!" They had terrible rulers over the last 50 years and even further back off and on. The one shepherd-king who became the ideal among the chosen people was David, known as a shepherd-king. So a ruler and a shepherd are the same.

In today's first lesson, Jeremiah has, as I said before, been preaching against these rulers who are destroying God's chosen people, leading them toward a disaster, which quickly happened after the time that Jeremiah proclaimed these words. But at the end of that lesson, as you may recall, Jeremiah offered a word of hope: "The day is coming when I will raise up a shepherd-king who is David's righteous successor. He will rule wisely and govern with justice and righteousness. That will be a grand era when Judah will enjoy peace and Israel will live in safety. He will be called Yahweh our justice." Of course, this is Jesus, the one that Jeremiah is looking forward to.

In today's gospel we see how Jesus becomes that good shepherd. First of all, he is so solicitous about the disciples. They've been out preaching and healing and drawing people together around the message of Jesus. They've been at it for a while and now they've come back, they're all excited, and they need some rest. So Jesus directs them to get into the boat and go across the water, find a secluded place and begin to have rest.

As we hear in the gospel, the people suspected where they were going and crowds of people got there ahead of time. But notice what Jesus does when he gets there. You would think he might be a little bit irritated. He told everybody to go and find a secluded place so they could have peace and quiet. Now the crowd is right there. But Jesus isn't annoyed. He looks on the people and as St. Mark tells us, "He has compassion on them."

That's a word in the Hebrew that means he's deeply emotional. He has deep feelings of concern, of care, of love, of compassion for these people because he says, "They're like sheep without a shepherd." They don't have good rulers, good leaders, so he begins to minister to them. I think it might even impress us a little bit more how Jesus is so filled with compassion, that in spite of what he has just experienced (which we didn't hear in the gospel, but just before today's lesson), Jesus had received word that John the Baptist had been murdered by King Herod. He was beheaded because he had protested as a prophet against the king. Jesus loved John and it was a terrible loss for him.

In spite of his own deep sorrow, sense of loss, Jesus could still reach out with compassion. He began to be that good shepherd. First of all, as in today's lesson, he begins to teach the word of God. Mark even records how it went on for a long time, so we get off easy most of the time, but Jesus spoke for a long time. His words, I'm sure, penetrated deeply for the people. That's something that we might not think about, but there's another example of this in the gospels on Easter Sunday.

You may remember that story of the disciples who left Jerusalem totally disconsolate and sorrowful because the one they thought was to restore Israel had been destroyed in the crucifixion. But he accompanied them on their walk. Do you remember they get to the end and Jesus talks with them? Afterward they say, "Weren't our hearts burning within us as we listened to him?" I'm sure the same thing was happening to that crowd as Jesus spoke. Their hearts began to burn within them as they heard the word of God proclaimed, that word of love proclaimed to them.

Now it's important for us as we reflect on these scripture lessons to realize again what happened at baptism. We were anointed with chrism to be priest, prophet, and king, or ruler, shepherd. So we have the responsibility of coming together to celebrate the Eucharist. We act as a priestly people because it isn't just the priest that's doing it; it's the whole community. This is a community that does that well, joins in the celebration and participates, and it's really a priestly community. But also, I hope more and more, a prophetic community where by not your words so much, but by the way you live, the message of God's love is being proclaimed.

But now also we have to take seriously our role as shepherds, which is caring for other people. I suppose the first thing we would think of is young people in our midst. We want to pass on the word to them, to guide them, to lead them, to be their shepherds as they grow into awareness of Jesus. But then we have to be that kind of a shepherd within our parish community, within our church of Detroit, within the universal church.

This community has to continue as best we can to be the shepherds that carry on leadership within our neighborhood, within our city, within our country, within our world. We have this call, again, to be priest, prophet, and ruler or king. I must say (and I'm sure you will agree with this), over the years — how many — 50, 60, you were blessed with a sainted shepherd, Father Pete, and how we miss him. But now, as you have been doing, you must continue to carry on that kind of leadership that he gave by his example of ruling with love, guiding the people with care, and being a true shepherd.

All of us must share in that work so that we spread the message of Jesus into our community, into our world, so that as St. Paul says in the letter to the church at Ephesus, "Barriers are broken down, people come together, we can have peace." All of us must take our vocation seriously that came to us with baptism to be priest, prophet, and king, to bring the healing message of Jesus into our lives and into our world.

[Homily given July 22 at St. Philomena, Detroit, Michigan. The transcripts of Bishop Thomas Gumbleton's homilies are posted weekly to NCRonline.org. Sign up here to receive an email alert when the latest homily is posted.]

Column | We have to take seriously our role as shepherds

We must continue to listen to Jesus and listen deeply