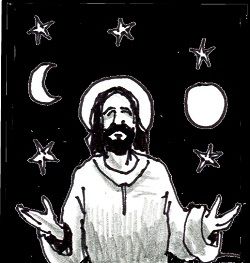 “The Word became flesh and made his dwelling among us” (John 1:14).

The brighter the light, the darker the shadow. We end one difficult year to enter another, and lest we cast our hopes into an unknown future with too much optimism, the scriptures throw both light and shadow on our resolutions that next year will be better.  John the Evangelist proclaims the Word as a light come into the world that was rejected, and John’s First Letter grieves over dissenters and liars who have abandoned the Beloved Community.

2022 is shaping up to be a critical year on many fronts, and only if we are ready to take up the hard work of turning current trajectories in another direction will some serious crises be met and resolved.  The Word is always proclaimed with abundant grace, but we must listen and act to make it flesh in us.  Will we be the light of the world for our generation or silent witnesses and willing collaborators in its destruction?

Our challenges begin with the fate of the Earth.  Pope Francis sounded the alarm immediately after taking office in 2013.  Laudato Si, an eloquent and intelligent plea for global action, has been largely ignored. He called out the global economy for exploiting the poor and trashing the environment. Climate change has disrupted weather patterns with flood, fire, drought and the displacement of millions while a pandemic rages.

Political conflicts fueled by fearmongering and racism threaten to destroy the rule of law and democratic self-government. Growing disparities invite violence between the haves and have nots, justifying police state powers and autocratic rule as the only solution.  We are right to be nervous about 2022, the showdown between an unsustainable status quo and the chaos of revolution from the left and the right, a replay of history’s worse case scenarios to remake the world by first burning it down.

The Gospel is meant for times like these, but it requires disciples to incarnate and enact its spirit and truth with courage. The Word has come in person to show us how to live.

What came to be through him was life,
and this life was the light of the human race;
the light shines in the darkness,
and the darkness has not overcome it    (John 1:4-5).

John’s Prologue lays out the plan of God for Creation and invites humanity to model itself on the Christ, the authentic human being, full of truth and grace. To receive him is to become the children of God.

The world will party the night away and rise again tomorrow resolved to survive and hope for better days. We, too, must awaken with confidence that God is in the world and will bless our small human efforts to protect our planet and build communities that promote the well being of everyone. If we welcome the light and let it shine in us and through us, no shadow will overtake us, and no darkness will overcome us.

Apostle to the Apostles