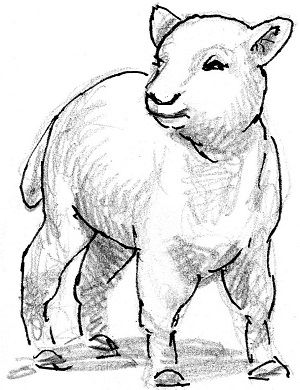 Both readings for today offer us a window into the early church toward the end of the first century as it struggled to grow beyond its original Jewish roots and to deal with dissension and heresies within. Peter’s vision eliminating ritual dietary rules is a glimpse into the quarrels over whether converts to Jesus had to become Jews by circumcision and obedience to the Law in order to be Christians.

Peter supports the position taken by Paul on his missionary journeys among the Gentiles, where the gift of the Spirit and faith in Jesus was sufficient for membership. The fourth Gospel and Letters of John later confronted heretical positions about who Jesus was and the behavior of bad shepherds in the emerging Christian communities.

Jesus is the Good Shepherd, and his goodness is seen in sharp contrast to other supposed leaders who have apparently abused their positions for personal gain, fleecing the flocks entrusted to them. Images of “thieves and murderers” getting into the fold over the wall or not coming in through the gate give us a sense of the crises these early communities may have been facing.  The imagery links back to the prophet Jeremiah, who condemned corrupt shepherds who had ravaged and scattered the people of Israel in his time.

Without the Law and full observance of Jewish rituals, personal faith in Jesus became the authenticating measure of membership in the church.  Baptism and sharing in the Eucharist were the criteria for belonging to the body of the risen Christ. Those who believed in him heard the voice of Jesus as sheep respond to the voice of their true shepherd.

Prior to the doctrinal councils of the fourth century, the memory of Jesus and the example and professions of the early preachers and martyrs helped preserve the church through the persecutions and internal quarrels as the traditions took hold. People experienced the power of the Holy Spirit in their lives, and communities grew as more and more converts were attracted to their joy and vitality.

Pope Francis is calling believers today to walk with each other, sharing their struggles and the influence of the faith in their lives.  These synodal encounters and conversations have always been the basis for the sensus fidelium that has reinforced the church over generations.  Sharing the Scriptures and living the graces found in Communion deepen confidence in the living presence of God in our daily lives.  Seeing faith at work in other people is the essence of knowing the one Spirit at work in all of us.

Jesus promises abundant life as the sign God is guiding and correcting us on the way. We go to God by the ordinary path, to do the best we can as things arise, day after day.

'A celebration for the whole church': Lutheran women reflect on 50 years of ordination

The least are greatest