All that really matters 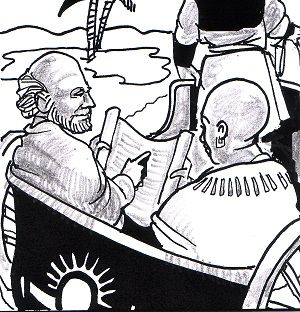 “Everyone who listens to my Father and learns from him comes to me” (John 6:45).

When we speak of faith as a gift, we are describing a gradual awareness in our hearts that the Source from which we came is showing us the way to our destiny. This process of self-understanding is as mysterious as consciousness itself, more intuitive than logical, but an essential part of being human. We are meant for love and bound for glory from the outset, and nothing can extinguish this divine summons.

Pascal wrote that “the heart has reasons that reason cannot know.” St. Augustine describes his conversion as realizing that his heart was restless for God and God alone. We come to faith because the search for God is built into us naturally and awakened by the Spirit of God when we need it the most.

The story of Philip and the Ethiopian eunuch on the road to Gaza illustrates this process of coming to faith poignantly.  Despite his high court position, the eunuch knew that the childhood castration that was meant to render him for service had deeply violated him. His quest for meaning in his suffering led him to discover Isaiah’s haunting image of the “lamb silent before the shearer” and, with Philip’s help, brought him to an intimate identification with the crucified Jesus. The eunuch’s joy at finding Jesus opened him to the gift of faith. He was no longer alone, a victim or a tragic anomaly. He was a disciple of Jesus.

By his death, Jesus gathered all the crucified, violated and rejected peoples of history into his redemptive body, victorious over suffering and death. It was the will of his Father that he not lose any of those entrusted to him. They are the new humanity, the new creation destined for life with God. The gift of faith assures us that we are also within that beloved community.  We belong to God in Jesus Christ. In the end, this is the only thing that really matters.

Column | All that really matters

What chance has idealism in this endlessly divided world?

The path of paradox