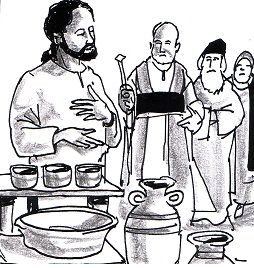 “God looked at everything he had made, and he found it very good” (Genesis 1:31).

What may have begun in the ancient world as hygiene and health precautions ended up dividing everything into clean and unclean.  Food and activity that appeared to cause illness or contagion were prohibited to protect the community. But when these prohibitions were applied to religious and moral purity or used for control, reality was defined as either sacred or profane.  The Books of Deuteronomy and Leviticus describe the multiplication of rules for men and women, sex, birth, death, illness, and every kind of human activity.

Today’s readings contrast the original state of the world at creation, when God pronounced everything very good, with the attitudes and practice Jesus encountered in his own time regarding ritual hand washing, eating and the cleansing of cups and dishes. When the scribes and Pharisees criticized Jesus’ disciples for not observing these man-made traditions, Jesus responded by citing the obsessive concern they had for such rules while neglecting their own parents by dedicating to God financial support they owed them according to the fourth Commandment.

Jesus’ celebration of the goodness of all creation was a frontal assault on an intricate and self-serving culture of control that gave religious leaders authority to define others as unclean, untouchable, sinful, and unworthy while flaunting their own status as men of God devoted to the sacred and as defenders of the Law.  Their conceits included special clothing, reserved seating at banquets, automatic respect and freedom from engaging the unwashed poor and the ignorant masses.

Jesus called them hypocrites. By comparison, he moved freely among the crowds, touching and being touched by lepers and other sick people, talking to and being with women, eating with public sinners, healing on the sabbath, disregarding protocols that kept him from responding to anyone in need.  His freedom and teaching that God loved everyone, even sinners, was causing an uproar among ordinary people, who said Jesus had real authority, unlike their official leaders.

This may seem like ancient history and prescientific ignorance, but our world is likewise divided into sectors and levels of conformity that preserve cultural norms that effectively separate people into clean and unclean, safe and unsafe, sacred and profane. Income, race, education, work and class create the perception of superiority and inferiority. Income and housing divide people by zip code and neighborhood, limiting social contact and reinforcing invisible borders that protect the illusion of familiarity and security.  Consumer culture pushes endless products promising levels of hygiene, health, beauty, sanitation and safety from germs, odors and purity the ancient world could not have imagined.  Churches and religion are de facto segregated.

Breaking out of this systemic separation requires conscious effort and deliberate engagement across boundaries, not just as visitors and tourists, but as adventurers and constant learners willing to risk comfort zones to engage reality, expand circles, make new friends, experience other peoples’ lives.   It is also the sure way to find and meet Jesus, who is everywhere.

Column | All is sacred

Amid the pandemic, finding peace in pie