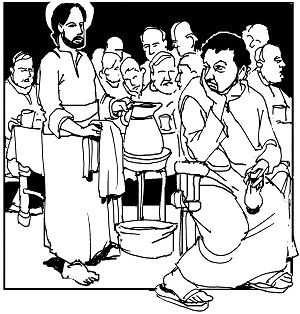 Many scholars and novelists have speculated about why Judas betrayed Jesus. The crudest accusation comes from the author of the fourth Gospel, who says simply that Judas was a thief (John 12:9). He did it for money, and a paltry sum at that — 30 pieces of silver to hand over his master.

Some suggest that Judas was both treasurer and campaign manager, a highly intelligent disciple among simple fishermen and a friend who wanted Jesus to succeed. It was out of desperation that he tried to dissuade Jesus from throwing his life away and instead negotiate his mission with the power establishment to achieve the reforms he was so eloquently promoting. Even Peter would have supported this when he scolded Jesus at Caesarea Philippi for predicting his own death.

Judas’ plan to convince Jesus to succeed fails, and he hangs himself out of grief when he realizes that the Sanhedrin he had helped arrest Jesus in the garden intended to hand him over to Pilate and to his death.

Another possibility looms in today’s Gospel passage about the Last Supper, that Judas loved Jesus, but felt excluded from the inner circle of Peter, James and John, thought to be the “disciple whom Jesus loved,” reclining closest to him at table.

With a personal signal, Jesus identifies Judas as his betrayer by handing him a piece of bread dipped in the dish at the center of their semi-circular banquet table, thus fulfilling one of the most heartbreaking prophecies in the scriptures: “My dear friend, who has shared bread with me, will raise his heel against me” (Psalm 49:2).

Betrayal is always an inside job.  Only a close friend could know where to direct your enemies to find you and arrest you. Only a dear friend could offer to identify you with a kiss. Of all Jesus’ sufferings, his betrayal by a beloved friend, perhaps out of jealousy or some strategy to get him to change course, was the most intimate and hurtful moment of his Passion.

Despite theologies and even Hollywood movies that say that Jesus’ worst suffering was physical, betrayal was probably the act that made him feel most abandoned. His closest friends betrayed, denied and left him to his fate in his hour of greatest need.  The words of Psalm 21, “Why have you abandoned me?” came easily to his lips as he hung on the cross: Even God seems to have disappeared into heaven as he approached his death.

Despite the anguished burden of despair that pushed Judas to hang himself, Jesus died proclaiming his trust in God: “Into your hands I commend my spirit.”  He was so great a friend to his friends and to the world that rejected him, Jesus may have stopped on his way to the Father to catch Judas as he hurtled toward hell, the one lost sheep in a hundred he had promised to save.

Breaking up is hard to do