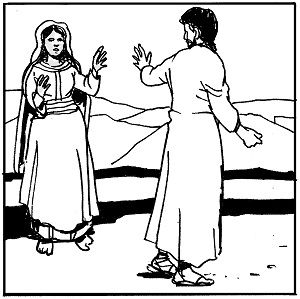 Twentieth Sunday of the Year

Jesus encounters a desperate woman at the border pleading for her daughter. This Gospel story could have happened yesterday, and the drama spans the centuries from first century Palestine to the Rio Grande Valley. How are we supposed to respond to foreigners in need?

Jesus’ meeting with the Canaanite woman has its own context, a theological theme familiar to Jews who believed that God’s salvation was universal rather than exclusive to Israel. Other nationalists argued that the promise was only for the “Chosen People.”  Jesus seems to begin there, but the pagan woman at the border shows him that the Spirit is already at work beyond the “lost sheep of the house of Israel,” and her faith expands his ministry and that of the early church for whom this story was composed. Matthew’s faith community in Antioch was already half pagan converts.

But the heart of the story is about compassion overriding both nationalism and religion.  The woman is also teaching Jesus about the power of a mother’s love for her child. She will not take “no” for an answer. She calls him Lord, Son of David, acknowledging that God is with him.  When he ignores her, she persists. When he insults her with a common Jewish slur for pagans as “dogs,” she outdoes him with her own image of hungry puppies getting scraps under the table from the children.  His resistance becomes astonishment, and Jesus knows that God has already granted her plea.  Where there is faith, there are miracles.

For many Americans, the border is far away and the refugees and immigrants in our midst are living in the shadows as they harvest our food, process our meat, fix our roofs, make beds and clean bathrooms in motels, care for our elderly in nursing homes, essential workers during the pandemic, hoping for relief and recognition from our national policies. In 2018, many parents crossing the border as asylum seekers lost their children before being imprisoned or deported. High profile, politically motivated directives focused on all undocumented persons instead of criminals, deporting thousands of workers and stranding their families without income.

Mixing God’s Word and contemporary issues is why we break open the scriptures from the pulpit and in our hearts.  How many women at the border are begging for their children? Will compassion override nationalism when confronted with tears and prayers of parents carrying the belief that their long journeys would bring them to a nation once founded on immigrants, the land of opportunity instead of a place of terror and indifference?

Empathy requires insight and experience, and for most of us these issues compete with so many concerns, some real and some being generated by the politics of an unprecedented campaign season in a divided nation. How can we be better informed to help decide the future of the country we want to be, hope to be?

A challenging but even-handed documentary series on Netflix titled “Immigration Nation” is one way to take our faith virtually and vicariously into the world of  suffering and hope where the soul of America will be either lost or redeemed. To better understand today’s Gospel and to prepare for the elections, consider viewing it as an act of Faithful Citizenship.

Column | At the border

10 tips for college freshmen: Staying connected to your faith

Eucharist must create culture that welcomes all, says Manila cardinal