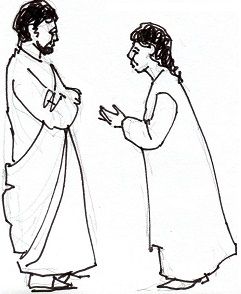 In another lifetime long ago, I was assigned to say Mass at a nearby Catholic college for the sisters community that ran the place. I prepared my homilies carefully, knowing that there were many scholarly faculty in attendance.  It was the Feast of St. Scholastica, and my remarks were unremarkable but theologically plausible until I suggested that Scholastica and Benedict were identical twins.  I did not need the stifled guffaw from one of the retired sisters to realize I had made an error that revealed I had flunked biology in college, and I did not escape a visit in the sacristy after Mass by a sister designated to tell me no harm done and how everyone had enjoyed my homily.

Every man needs a twin sister, either an actual one or an inner voice from his feminine side to help him navigate the mysteries of life. Failure to understand how much smarter women are than men has led to many egregious errors in world history, including wars, repression of half the human race and a riot of misunderstanding between the sexes that has brough human progress to a standstill.  The survival of the Catholic Church requires the patience and good will of its majority female membership, many of whom are biding their time waiting for better days.

King Solomon can be excused for having too many wives as a way bolster his alliances with other kings by marrying their daughters, but he did not escape the chaos of all the maneuvering for his attention. No wonder he was exhausted and distracted when it came to keeping strange gods from his household. If only he had had a wise woman counselor, he might not have lost his throne.

Jesus meets his match in the Syrophoenician woman in today’s Gospel. He underestimates her fierce determination to save her sick daughter and embarrasses himself with a crude pejorative about dogs when he refuses to help her because she is not a Jew. He cannot match wits with her and in the end must have realized that the Holy Spirit, that ultimate feminine genius identified in the Bible as Wisdom, was siding with the woman.

Exegetes and scholars bend over backwards to salvage this story to say that Jesus knew what he was going to do and had turned the encounter into a teachable moment for his disciples.  The dogs under the table were really puppies and the banter with the desperate mother was playful and only a lead-up to granting her request.  In any Gospel but Mark’s this might suffice, but Mark, the earliest of the four, leaves open the possibility that a very human Jesus was learning the hard way and changing his mind about borders and Jewish exceptionalism when the woman stretched him and his mission to include everyone, even foreign women.

I am glad to know that twins are not always identical.  When brother and sister, they intimately share identity but also the different experiences and chemistry that enrich the full mystery of being human.  We mature by encompassing the full range of our potential and by accepting the different ways people experience their sexual identities. Everyone adds to a wholeness no one person can claim alone.

Column | Both is better

The Year of Mercy is a time to learn about Islam