A call for you 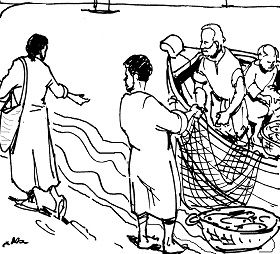 “They left their father Zebedee in the boat and followed him” (Mark 1:20).

The two readings assigned to today’s liturgy for the first Monday in Ordinary Time are both about how God calls disciples. The first reading from the Book of Samuel tells about the peculiar circumstances of Samuel’s conception and birth. He is called from his mother’s womb by God’s intervention, since Hannah, his mother, is barren. He will be raised in the house of the high priest, Eli, and as a young boy he will be called to serve by a mysterious voice in the night.

The story does not question the practice of multiple wives for men or the prejudice for male offspring in a patriarchal system, but nonetheless affirms the way God uses limited concepts and cultures to achieve divine purposes. Samuel will become high priest and anoint David, ushering in the royal line from which Jesus will emerge a millennium in the future.

The call of the first disciples by Jesus is much more direct and without genealogical precedent. The only qualification these apostolic successors to Jesus need is that they are fishermen who happen to be working their nets along the shore of the Sea of Galilee when Jesus is passing by. The suddenness and totality of their response suggests that they already knew Jesus from his preaching or that the intensity of this moment was so powerful they are literally caught like fish.  Jesus’ graced summons captures their hearts and minds. He will teach them to do the same thing with other future disciples.  They are to be skilled “fishers of men.”

It took three times to alert the boy Samuel that God was calling him. The first four disciples, Andrew, Peter, James and John, leave their fathers, their livelihood and future on the spot to follow Jesus. We speak of “love at first sight” to describe other life-changing decisions.  Songwriter Harry Chapin’s song “Jubilation” in the musical “Cotton Patch Gospel” has the disciples sing: “Everybody wants to touch his dream just one time; I know I'll never ever get this close again. Everybody wants to feel that feeling sometime; That's why I don't want today to come to an end.”

Whatever the specifics, the disciples are changed forever by their encounter with Jesus.  The cost of discipleship is clear.  John the Baptist had just been arrested, and Jesus is taking up the same message that God’s Kingdom was at hand. If they go forward with this carpenter from lowly Nazareth, they will find their lives by losing them; they will imitate Jesus’s own decision to entrust himself completely to God’s plan to save the world.

Faith teaches us to wait for God’s call. All we can do is make ourselves available. What God wants of us is larger than our own ideas or ambitions, even for holiness.  God initiates, inspires, enables, often by inviting us to take a first step, not the whole journey. Where God sees desire, God shows us how to begin.  We are now in Ordinary Time, so look for signs of your call in ordinary ways and things, then say, “Here I am.”

Column | A call for you

Why believers and unbelievers must read Fr. James Martin's new book on prayer

Free to be heroic