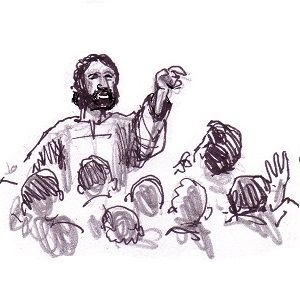 At the start of his ministry, Jesus is at the height of his popularity. Large crowds from Judea and the coastlands are following him. Fresh in his mind is the baptismal affirmation he received when the voice from heaven called him “beloved son,” and the deep blessing he felt as he read from the Prophet Isaiah, “The spirit of the Lord is upon me and has anointed me …”

Among the crowds are many aspiring disciples who hope to be chosen to accompany him on what appears to be a triumphal march from Galilee to Judea and Jerusalem. In the thrall of this energy and the many signs of success, Jesus withdraws onto the mountain to commune with his Abba to discern one of the most important decisions he will make -- the selection of his inner circle of companions.

We do not know the talents and potential of the many not chosen, but if Jesus was trying to form a community representing the full range of human problems, he succeeds. Among his fishermen friends, Peter is boastful and unreliable, James and John are ambitious hotheads, Nathaniel has little confidence in anything coming out of Galilee, Matthew is a former Roman toll collector, Thomas has his doubts, Simon is a zealot, and Judas Iscariot will betray him.

If we assume that this group was inspired by Jesus’ night of prayer, then God’s plan is clearly not human success. It is a demonstration of the power of grace to redeem fallen human nature, to draw saints from among sinners and to heal a broken world not by force but by the gift of divine mercy. The disciples will be models for what love can do with human weakness.

We glimpse this process in what happens next. Jesus comes down the mountain with the Twelve and begins to minister to the crowds.  Every kind of distress and frailty is present in people, including those tormented by unclean spirits. Not just physical damage, but Jesus is able to free people from internal disorders and mental afflictions by simply touching them. Wholeness flows from him, for Jesus exhibits the image and likeness of God, the template of creation as it was in the beginning, before human nature was marred by sin.

The Twelve will live intimately with Jesus during his public ministry.  He loves each of them, including Judas. Their stories are invitations to us to come as we are into discipleship. Our membership in a faith community and through the Word and sacraments are the lifelines that keep us in touch with Jesus, whose love is gradually restoring God’s image in us.

He is coming down the mountain now after a night of prayer. He looks out over the crowd, and then he calls each of us by name.

Pat Marrin will be on the road until September 17. Pencil Preaching will resume publication on September 18.

'Offer it up,' tee off, but don't tell anybody

Senior Life: Daily Mass: The spiritual heartbeat of the community