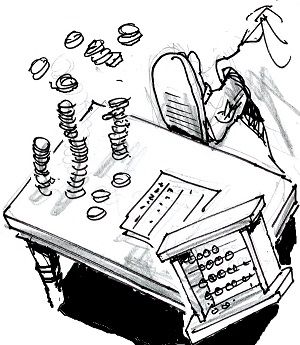 Large buildings are one way to establish the permanence of governments and churches. The Lateran Basilica in Rome, whose dedication in the fourth century is commemorated today, was first the palace of a wealthy Roman family, later given to the popes by Emperor Constantine and now designated as the pope’s parish church.  Its long history reflects the inevitable danger of entanglement of money and power with spiritual institutions that today’s Gospel is about.

The second temple in Jerusalem, successor to Solomon’s temple, was built by King Herod in order to gain acceptance by his subjects.  It was central to Jewish worship and animal sacrifice. It was also controversial in Jesus’ time as the perceived nexus of money and power divided among the high priestly and aristocratic classes, Herodians and the Roman occupation because it was a source of commerce and taxation.  Jesus’ dramatic act of cleansing the temple highlighted the corruption of its spiritual purpose as a sacred symbol of God’s presence. It is not hard to see how this public protest roused official reactions that eventually contributed to Jesus’ death.

Jesus called it a “marketplace” and a “den of thieves.”  He emphasized that God’s spiritual presence was not confined to any building and that real worship was in “spirit and truth.”  The four Gospels developed the theme that Jesus himself was the true locus of God’s presence. His death was compared to the destruction of the temple, but he surpassed it in glory by his resurrection and the power of the Holy Spirit.  His body, the church, became the new temple not built by human hands and indestructible in history.

The cleansing of the temple is a work in progress. Pope Francis is currently engaged in efforts to ensure financial accountability during yet another scandal involving Vatican funds, ordering the removal of a cardinal and shifting oversight to outside experts. Dependence on philanthropy to maintain churches and ministries in the church is a perennial challenge that has entangled some bishops with wealthy donors tied to their own financial and political interests.  The simplicity of Jesus and the early church contrasts with the complexity of financing a world church.

We all share in the dilemma when we discover that material possessions can possess us and limit our commitment to live simply.  Readiness to cleanse our own lives of preoccupation with money and things is not easy in our wealth focused culture. Good people can be caught up in a “marketplace” idolatry that impacts their decisions, priorities and relationships.  Today’s commemoration reminds that one way to celebrate God’s gifts is by being authentic temples of the Holy Spirit, houses of prayer and centers of generous service to others.

Mercy is a child named Jaden

Nunzio Sulprizio, a messenger that the church and world need right now