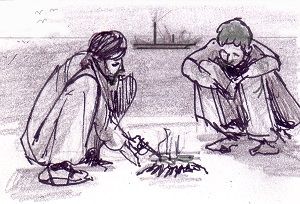 On the eve of Pentecost, our readings from Acts and John’s Gospel complete the story of Jesus’ earthly sojourn and the roles played by the two great Apostles, Paul and Peter.  Paul is on his way to Rome, where tradition says he was executed under Nero during a mass persecution of Christians.  Tradition also says that Peter, too, ended up in Rome, perhaps executed at the same time as Paul.  It would make a powerful scene in any play about the early church to present these two leaders reconnecting in the dungeons below the Colosseum.

Perhaps Peter would share the haunting question the risen Christ had posed to him on the shore of the Sea of Tiberias; “Do you love me?”  His failure to stand by Jesus in his hour of need, or even acknowledge he knew him, was the self-inflicted wound in his soul only divine mercy could have healed to restore him to leadership of the church. The only way Peter could show that he truly loved Jesus was to give himself over entirely to the needs of the community of faith.  He was recommissioned in love to feed the sheep and lambs Jesus had shepherded. He would become the great sign to others that no sin was too great for God to forgive.

Paul knew the story and bore the same wound Peter carried. He had persecuted the church. He had watched Stephen being stoned. He had pursued the followers of Jesus to stamp out the blasphemy of their claim that Jesus had risen and been proclaimed the Messiah.  Did he love Jesus?  After his encounter with Jesus on the road to Damascus, his soul, like Peter’s, was seared with the desire to serve Jesus as the only way to find his way back to God. Jesus had seized him with love, imprinted him with the cross and shown him the glory of the resurrection.  He was chosen and called to take the Gospel to the Gentile world.  His labors had brought him to Rome to witness by his death to his love for Jesus.

Our preparation for Pentecost perhaps brings us to the same question.  “Do you love me?”  In any human relationship, such a question would mark a turning point. We either retreat from it or go forward into a life-changing adventure of shared joy and sacrifice.  To ask for the Holy Spirit is to open ourselves to an intimacy with God that will change us forever.  Peter and Paul knew it was a question that could be answered only by living it.  We are invited to say, “Yes, Lord, you know that I love you,” and then see how this changes us, the path we are on, the priorities we make, the people we welcome and serve.

Come Holy Spirit, kindle in us the fire of your love.

Column | Do you love me?

Archbishop says people returning to confession because of pope

Being a mother makes you a fighter in many battles