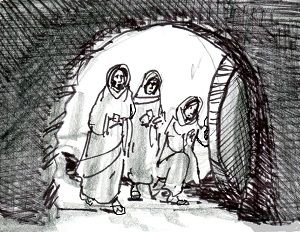 “When Christ your life appears, then you too will appear with him in glory” (Col 3:4).

The Easter event gets off to a running start. There is something of childlike exuberance in so many adults running to share joyful news. The women run “fearfully yet overjoyed” from the tomb to tell the others what they have seen and heard at the tomb. The Good News spills out in the Masses and readings proclaimed from dawn and into the day.  In the week that follows, the story unfolds.

Peter, exhausted from grief after a long night of self-recrimination, races to the tomb to see for himself if Mary was right and it is empty. In John's version, the other disciple, the one that Jesus loved, runs faster to show that love sees what authority still seeks. The burial clothes, arranged apart, preach the Gospel. You will soon understand that what the Scriptures knew all long. Jesus has risen and now goes before you into the world and into history.

The two disciples on their way to Emmaus, perhaps running away from the disaster there, turn and run back after their encounter with a stranger on the road, revealed as Jesus in the breaking of the bread.  Their hearts are on fire with insight into the necessity of his suffering to fulfill the Law and the Prophets

There is doubt and denial at work as well. The eleven Apostles balk at the women’s news of angelic messengers and the empty tomb. The poor soldiers, posted by the high priest to make sure the body is not stolen, stumble into the city to report their failure to guard the tomb. The council is assembled, plausible denial is concocted to cover up the soldiers’ account, some cash spread among them. Fake news, that’s what this fast-moving rumor is, that a dead man is alive.

The Scripture readings build the progressive story of the early church’s journey to faith.  From the empty tomb and women terrified into silence in Mark’s Gospel, we hear of more witnesses at the tomb, Peter and the Beloved Disciple running there with Mary Magdalene. Jesus then appears to her personally. The first glimmer of faith comes mysteriously to eyes opened by love.

Jesus then appears to the Apostles, scolding them and comforting them at the same time. He breathes the Spirit of forgiveness into them, shows them his wounds, eats with them and begins to prepare them for their mission to the world.

The Emmaus story is the church’s proclamation in miniature, showing how Jesus’ death fulfilled the Law and the Prophets, and that by sharing the Scriptures and breaking the bread his disciples were opened to faith. As the Apostles return to their boats and their lives in Galilee, they become fishers of men, sent to catch the whole world for the God’s Good News.

These stories, preached, shared and remembered when the church met to celebrate Eucharist, became the four Gospels and the letters of St. Paul that inspire our faith.  Like the first generation of believers, we need to experience the same power of new life to enter the mystery and let it transform us. We need moments when our hearts race within us because we have encountered Jesus, felt his love and responded to him in love. When he becomes real for us, our eyes are opened and he appears everywhere.

It is good that we have 50 days of Easter to ponder this and let it take hold. Now is the season to ask questions, pray for faith and take walks to explore our doubts, to listen intently to the liturgy that is meant to form us. Something wonderful is happening, and it is about us.

Why believers and unbelievers must read Fr. James Martin's new book on prayer

Twenty-Sixth Sunday in Ordinary Time: Hunger affects us all

God calls us to show up, be present

'Open the windows of your soul'