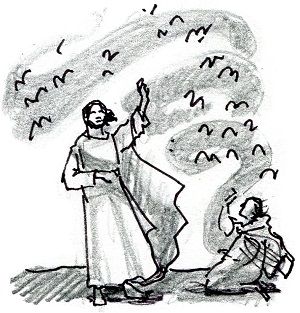 When people feel discombobulated, they say their thoughts are scattered. The meaning of the word diabolic is to cast apart, scatter; it is the opposite of symbolic, to gather together. Arthur Conan Doyle’s Sherlock Holmes was all about restoring order and reason to a world challenged by the forces of chaos. Moriarity, Holmes’ nemesis, was a caricature of Nietzsche, the brilliant German philosopher whose critique of culture and thought represented by the British empire seemed to presage nihilism and threatened to open the door to chaos.

The theme of the struggle between order and chaos runs through human history, culture and religion. In today’s Gospel, Jesus’s announcement of the coming of the kingdom of God provokes alarm in the existing order and its underlying ideas of dominance, division and conflict as defining human affairs. Evil spirits under the prince of demons, Beelzebul (literally, “lord of the flies”), have ruled the world with fear and the threat of death. When Jesus drives out evil spirits, his critics accuse him of being in league with the devil. He responds that the scattering of demons is proof that greater power is at work, “the finger of God.” A new world order of love, healing and reconciliation has overcome evil.

The cost of this restoration is Jesus’ willingness to die for love, thus overcoming death by embracing it and taking it with him to the grave. But at the moment of ultimate disintegration, God reverses the power of sin and death with the greater power of love and life.  Where death would scatter the human race in diabolic triumph, Jesus mounts the cross and draws all things to himself. With the resurrection, a new creation is revealed. God’s original plan is restored.

Each day we have the ability to either choose to gather with Christ, the symbol and rallying center of God’s loving plan for the universe, or to disintegrate, to be scattered. The most radical thing we can do is to say, “Today, Lord, I gather with you; today I choose love.”

Column | To gather or to scatter

At the Lord's Table

Thirty-Third Sunday in Ordinary Time: A world of disorder