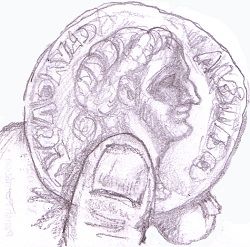 “According to his promise we await new heavens and a new earth in which righteousness dwells” (2 Peter 3:13).

During his 2016 visit to Mexico, Pope Francis remarked that building walls was unChristian. President Trump was quick to tweet that it was “disgraceful for the pope to be political.” The pope said his remarks had been general and not personal, and because the Greek word for politics meant “affairs of the city,” he took the president’s criticism of his concern for refugees and immigrants as a compliment.

The idea that religion should stay out of civic matters goes back to today’s Gospel when Jesus says, “Give to Caesar the things of Caesar and to God the things of God.” It was interpreted as the need for separate realms, one heavenly and the other worldly, later the basis for St. Augustine’s “City of God” and “City of Man.” History shows that this separation was often blurred as kings sought to control the appointment of bishops and popes commanded armies and reserved the right to crown emperors.

The U.S. Constitution’s separation of church and state has sometimes proved a movable line to both silence church criticism of government policies and to justify the solicitation of church support for political purposes.  Yet, religious concern over economic justice, world peace, racial equality and human rights has always been inseparable from moral and ethical principles, and Pope Francis has not hesitated to address the global economy, immigration and the environment as central to his ministry.  In this, he continues Jesus’ mission to bring good news to the poor, freedom to captives and the oppressed, and to call for a holy jubilee to redistribute the wealth of the earth more fairly (cf. Luke 4:18-19).

Heaven and earth were brought together by the Incarnation. God’s preferential love for the poor became flesh in Jesus, who preached about right relationships, the common good, an end to violence, welcoming the stranger, the sick and vulnerable into community, reconciliation and forgiveness as the path to life and God’s will for creation and all people.  For this, not happy talk about peace and love, he was executed by Rome as a hopeless idealist and dangerous provocateur.

We can see the contours of Jesus’ ministry in the evolution of Dr. Martin Luther’s scriptural and moral appeal to white Christians for voting rights for black citizens. When he added public criticism of the war in Vietnam and the need for a march on Washington to protest the systemic exclusion of minorities from the economy, King became a communist threat. And when his dream became a demand for full equality and his pulpit became a national platform attacking militarism, racism and poverty as the seamless evils that had betrayed America’s promise for all its citizens, he was judged as having crossed a line and was assassinated.

Every year the American bishops update and publish a guide for voting called “Faithful Citizenship.” It makes public participation in politics a duty to promote the common good.  We fulfill our discipleship by being good citizens who vote to put God first and Caesar in the service of the common good.

November reminds us to count our days aright