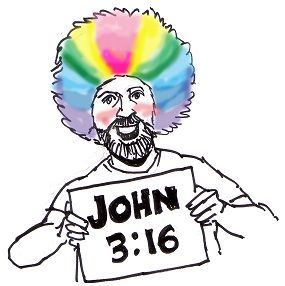 “God did not send his Son to condemn the world, but that the world might be saved through him” (John 3:17).

Today’s Gospel has the famous verse from John 3:16 seen for years behind home plate at baseball games on a sign held up by a rainbow-haired man who made it his ministry to remind the world that “God so loved the world that he gave his only-begotten Son.” How effective this evangelization was is unknown, but it probably got lots of television viewers to pick up a Bible for the first time.

The Acts of the Apostles was itself a remarkable marketing tool for the early Church as it tried to convince the Mediterranean world that Christianity was Rome-friendly. Like its first volume, The Gospel According to Luke, Acts was addressed to “Theophilus,” God-lover, to describe the expansion of the Jesus Movement into the empire. It is often heavy-handed in depicting the Jewish authorities and light on criticizing Rome, which, in fact, had executed Jesus.

In today’s passage, the Sanhedrin has jailed the Apostles for preaching about Jesus in the temple, but when the guards go to fetch them for trial, the jail is empty. The Apostles, formerly locked in an upper room for fear of the authorities, boldly proclaim the resurrection of Jesus. Their mysterious release from prison, though surrounded by guards, replicates the resurrection story itself. Like the Master, his followers cannot be contained in either a tomb or a prison cell to prevent them from announcing the Good News.

In this first week after Easter we are reminded that the Easter story is moot if it is not proclaimed by believers. We don't need rainbow hair or baseball tickets to promote it, but we should consider whether our faith is evident in the way we live. Does it make any difference that we are baptized into the death and resurrection of Jesus? Do our friends and neighbors encounter our faith and values in any visible form by our personal and public lives?

Column | God so loved the world