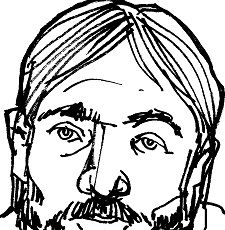 "Can a mother forget her infant, be without tenderness for the child of her womb?" (Isaiah 49:14).

It has often struck me just how my son embodies so many of the qualities of his late mother.  She taught him with purpose, patiently giving him everything she knew he would need to live a full life.  Today’s readings convey this same idea, first in Isaiah’s testament of God’s love for his people. Even if a mother were to forget her child, God would always love them. Today’s Gospel has Jesus reflecting on how God, as his Abba, is present in him constantly and how everything he says and does comes from this intimate source. We might say, “like father (mother), like son (daughter).”

One of the joys of giving birth must be when a mother sees her own image looking back at her. This face-to-face manifestation is the beginning of a lifetime relationship, whether in birth or by adoption. All children begin life by imitating their parents. We imagine Jesus in the home following his mother around, or in the shop learning the skills of forming wood into useful objects. He takes these activities and the language and metaphors from them into his adult life, teaching and storytelling.

The fourth evangelist reveals Jesus as God’s image and likeness in this world. When his critics challenge his claims of being God’s child, he points to his activities as reflections of the divine identity he possesses.  Many of his critics were scholars of the Law and the Prophets, and they must have been amazed at the clarity of his message flowing from the basic texts and principles they had studied. Jesus was centered, deeply committed to the Covenant and able to express it in his dealings with ordinary people.  From this constancy, he must have possessed a confidence that he spoke for God and was doing the things of God.

Yet, this very confidence defied his critics and they interpreted Jesus’ intimate regard for God as a kind of blasphemy.  They approached God in awe by keeping the law, while Jesus seemed so quick to reduce all the rules to love for others, as though people were like children before a tolerant and forgiving father instead of the stern Master they were trying to please. They found fault with Jesus for his laxity, his ease with ordinary people and his scandalous association with notorious sinners.  How can he claim some special closeness to God?

Yet, what Jesus was claiming was the closeness of God to everyone, especially the poor, the sick and the little ones. They were children of a loving father, and even sin could not keep them from God, who loved them and wanted them to have eternal life. As the human face of God, Jesus was drawing everyone to the  heart of God.  In these final weeks of Lent, the Lectionary offers us the narrative theology of the fourth Gospel, for whom belief in Jesus was the key to finding eternal life. As God gives life, so Jesus has this same power. To listen to his voice and to believe in him is to find life.

The daily Word now invites everyone to deepen their belief in Jesus as he arrives in Jerusalem, led by the Spirit to complete his mission by revealing that God is among us, within us and wholly accessible through faith.

Column | God in us

Passing on the faith to a new generation

If you wish, you can