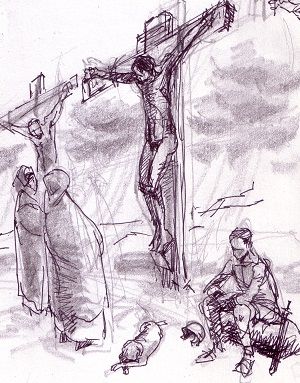 The death of Jesus was probably done quickly and efficiently. It would have been a routine detail for the soldiers assigned to public executions. The hill near the city dump along the approach to the gates of Jerusalem had permanent upright posts ready to receive the crossbars carried by the criminals. All that was needed was a toolbox containing a stout hammer and reusable iron nails and a coil of rope to hoist into place and lower the bodies for removal.

The very public location assaulted the crowds of pilgrims arriving for Passover. This ugly scene was meant as Rome’s deterrent to other troublemakers. Parents rushed their children past the hanging men, explaining to them the same lesson shouted at lynchings and beheadings in other times and places: This is what happens to people who break the rules, cause trouble or challenge public order.

The crucifixion of Jesus is the only historical fact we have that is corroborated by outside sources. Everything else is interpretation, including the faith of the early followers of Jesus recorded in the New Testament, then affirmed by the impact of his life and the memory cherished of his teaching and example as the path to God.

Jesus’ death on the cross left a hole so deep in human history that it has pulled the imaginations of millions as to some mysterious ground zero of universal sorrow and hope. It is a story repeated endlessly in art and literature to insist that, despite the propaganda of power, the truth outlives lies and love is always stronger than death.

The first glimmer of faith in the story is an empty tomb, negative evidence witnessed by his followers that Jesus was encountered alive — transformed — after his death. More importantly, faith holds that Jesus is alive, transcending time, the New Human Being at the end of the story appearing in the middle to show us what a full life looks like. He was God revealed among us, showing us how to live. This is our future if we live it as he did and imitate his love.

The scene is carefully choreographed in John’s Passion account. Jesus is the central actor, self-aware and deliberate, scripted by the prophecies, guiding the witnesses to understand the meaning of his obedience. From the question addressed to his enemies: “Whom are you looking for?” to his last words addressed to God and to the world: “It is finished,” Jesus completes on the cross the seven signs of the fourth Gospel to reveal that he is none other than I AM, the Author of life.

Good Friday dares us to believe this, then invites us to re-enact the story and find our own place in it. Some church groups will walk the stations of the cross through their cities, stopping to remember the suffering of those on the margins, the outcasts, imprisoned, the troublemakers and losers who dare to rebuke our systems and the values they enshrine for winners.

Jesus refuses to go away but continues to call dreamers of a different world, more just, compassionate, more human even as God is human, and that promises a Beloved Community to anyone who believes in his Way, the path of truth and love.

On this Good Friday, we enter the dark interval between the death of Jesus and the promise of his Resurrection. Walk this mile with me, he invites, and see how it  changes everything.

In mixed faith marriages, focus is on 'values,' not 'beliefs'

When Fran saw us, she saw only God