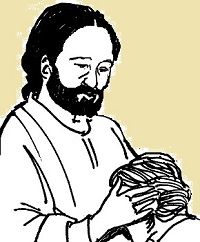 The history of God’s people is filled with moments when they do not see the handwriting on the wall and are deaf to God’s voice.  In today’s first reading, Solomon was barely in his grave when his two sons, Rehoboam and Jeroboam, split the nation into a northern kingdom called Israel and a southern kingdom called Judah.  A rebellion had been brewing for years over Solomon’s taxation to fund his lavish building programs, and the civil war led ultimately to the weakening and conquest of the two kingdoms by Assyria and Babylon respectively.  The Prophet Ahijah uses a curious and provocative symbol by tearing his new cloak into 12 parts to indicate the division of the nation in the conflict to come.

The tensions between the northern and southern regions of the country reflected this division in the time of Jesus.  We can track his movements to stay ahead of trouble with different jurisdictions, especially to avoid Herod after John the Baptist’s death. He travels north beyond the borders of Israel to Tyre, then east to the Decapolis, telling people not to broadcast his whereabouts.  In today’s Gospel, he heals a deafmute in a remarkably hands-on way not unlike the creation of Adam, using his fingers, spittle and an appeal to heaven using an Aramaic incantation. Mark’s low Christology is evident in a very human Jesus seemingly learning as he goes how to employ his divine powers.

But the underlying theme of so many healings of blind and deaf people also serves as a parable to the more pervasive blindness and deafness to God’s word as history again converges on a time of judgment. Jesus proclaims an extraordinary offer of grace to change the direction of events from disaster to transformation. Few see the suffering to come or hear the message of peace and forgiveness.

At the end of his ministry Jesus will weep over the city of Jerusalem for its failure to know the hour of God’s visitation.  Taking shape in Jesus’ understanding of the Scriptures and the Spirit is his own role to offer himself as the victim of this mounting evil in order to spare the nation. The image of a cloak torn by the Prophet Ahijah that symbolized division is countered in the Gospels by the seamless garment of Jesus spared by the soldiers beneath the cross. It is a sign of the power of Jesus’ death to heal divisions and renew life.

This pattern and paradox, the profound Paschal Mystery, repeats throughout history, and in our own time we sense the urgent call to our generation to work for reconciliation, to live the Beatitudes, to heal divisions and make peace as the redemptive mission of Jesus alive in us. The alternative is another senseless round of division and destruction already visible and audible in the plight of the poor, the displaced and excluded in our midst and around the world.

Seeing God through the eyes of a wild creature

Slowing down, seeing anew: the spiritual benefits of film photography