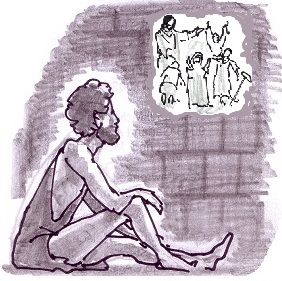 “I resolved to know nothing except Jesus Christ, and him crucified” (1 Cor 2:3).

The Passion of St. John the Baptist

The brutality of John the Baptist’s death by beheading compels us to face the decisiveness of faith and the shadow of doubt that often surrounds it. John lay powerless in a prison cell pondering whether he had fulfilled his mission to point to the Messiah. Reports said that Jesus of Nazareth, whom John had designated, was putting God’s mercy before justice, healing and forgiving instead of scourging and warning sinners. Had John chosen the wrong one?

John’s death is left to the machinations of a bitter queen and her lascivious daughter, played out at a birthday banquet for the king and his drunken court. Herodias succeeds in exposing her husband’s vacillation by trapping him into killing his favored prisoner. John waits in the bowels of the palace prison within earshot of the music and intrigue being hatched in the throne room above. He will die swiftly, and his bloody head will be delivered on a platter to the girl and her gleeful mother.

Mark’s account depicts John’s struggle as birth pangs. His dark cell was the womb of his rebirth, and like every newborn, John would make passage without understanding what was being accomplished through his short life. The same unborn child who once leaped in his mother’s womb at the approach of Mary carrying Jesus, would have to enter the Kingdom breech, not head first but heart first, with blind faith and total trust.

St. Paul, by tradition also beheaded, would find his brilliant understanding of God’s plans reduced to a simple encounter with “Jesus Christ, and him crucified.” He tells the Corinthians that no earthly logic or wisdom could explain the journey they would all have to make through death to new life.

Today’s liturgy celebrates the suffering of John the Baptist to remind us that faith is a dark mirror and an invisible light that guides us only in surrender. Our encounter with God in Christ is less logic than leap, a choice to fall in love, heart first, with divine Mercy. We rejoice with John to be confounded by such a mystery, then to be embraced by it.

With open hands and heart

A conversion of heart and mind

For a short while, we were Jackson's family