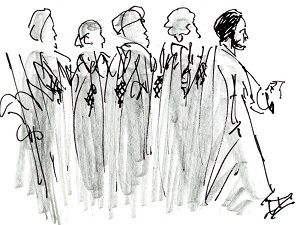 Jesus defends his disciples for stripping grain from the stalks to eat on the sabbath by citing an episode in the life of David. The Pharisees claim that the disciples are breaking the sabbath prohibition of work and, as always, find fault with Jesus for his laxity on the Law.

The example Jesus uses to put human need ahead of religious rules has a double message. He accepts the title of the Son of Man in making this point, and he also associates himself with David, who exercised this freedom to feed his men from the store of sacred bread in the temple while he was a fugitive from King Saul (1 Sam 21:2-7). As a rebel, everything David did was illegal, yet he is the hero of the story, free to discern what is the higher law. Necessity knows no law, and human need is always a priority.

Jesus is emerging in his confrontation with the Pharisees, scribes and temple priests as an outlaw. By breaking the rules, he is judging lesser laws in the light of the higher law of love, the first commandment that orders all others. With this insight, Jesus undermines the legalism of the religious establishment that has been controlling the people down to the last detail on dietary, work and purity rules, association with outsiders, outcasts and the poor. People are always free to do what is just and compassionate.

Today’s first reading from Samuel affirms the freedom of God to break convention and human expectations.  Samuel is told to ignore physical appearance and seniority in anointing a king to follow Saul.  The youngest candidate, a shepherd boy not even present with his seven older brothers, is the one God wants. This youth is David, the hero of Judah and the king of Israel, despite his many faults. David will define Israel’s longing for the Messiah and set the stage for the appearance of Jesus, God’s unlikely choice to save his people. He will come not in power but in mercy, another sign of God’s freedom, and the biggest surprise of all, Jesus will succeed by his suffering and death.

Discernment based on truth and love is the standard. Truly great leaders are measured not by appearance or influence, but by how they compare with real heroes who were great because they were humble, authentic because of their character, effective because of their willingness to sacrifice themselves for the common good. We pray for such leaders in our times.