A House Built on Rock 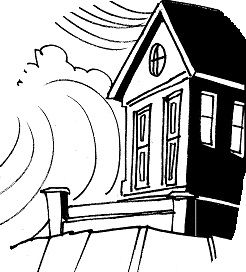 Everyone who listens to my words and acts on them will be like a wise man who built his house on rock” (Matt 7:25).

Jesus’ parable about building a house on rock instead of sand expresses the common wisdom that action is better than just talk. The sentiment is echoed in other sayings we will hear often as candidates for office debate ahead of the 2020 elections.  If in Texas, “all hat and no cattle” will describe some, and “put your money where your mouth is” will be used to challenge others.

Jesus’ words were directed at disciples who claimed to speak and act in his name but who failed to do the will of God.  Even prophesying, driving out demons and doing mighty deeds in the name of Jesus were empty show if disconnected from the deeper obedience to God’s direction and purpose.

A bedrock foundation involved two things: listening and acting. Real listening requires more than hearing and repeating the words. Rattling off Bible verses or catechism answers is a feat of memory not of faith. Only deep listening, what Mary did when she pondered the Word in her heart, produces genuine obedience, the root (obedire) of the word “to listen.”  Her total alertness to God was like that of a handmaid, a personal servant ready to act at the slightest gesture by her mistress.  This is why Mary is the perfect model for discipleship.

To act on the Word we hear is to submit to its power to transform us. Again, Mary listened so wholeheartedly, God’s Word became flesh in her womb. Discipleship is about embodying God’s purposes in our lives. It is a way of life and not just a creed we profess or a mental construct we can argue from.

The world of Jesus was filled with self-proclaimed prophets and teachers looking to attract followers. Many were charlatans eager to fleece the flock. St. Paul competed with false evangelists skilled at telling people what they wanted to hear. Discerning authentic leaders from con artists was one of his biggest annoyances. They followed after him and exploited the communities he had formed in the true faith.

The crowds were astonished at Jesus’ teaching. They heard reality in his voice and his message, unlike the official line from their own scribes, whose fine words did not ring true.  Jesus had “authority” because he was both down to earth and close to God, the source of all truth. We know it when we hear it. We believe it when we see it lived. We should demand this of our bishops and pastors.

Column | A House Built on Rock

In the stars: an epiphany story

Small things that have no words