I am the Way

may the all be one.jpg 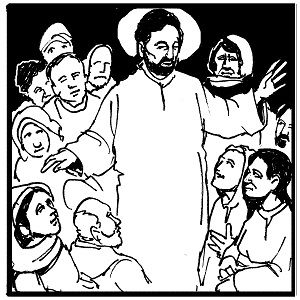 When Paul preached in Antioch, he had grasped the amazing narrative of Hebrew history that led to Jesus and beyond. He was eager to share it with his fellow Jews and the God-fearing Gentiles in the synagogue. But it had not always been so clear.

After Jesus’ death and resurrection, the first Apostles lost their way for a time. Jesus’ disappearance was an event made more traumatic by their total failure to understand his departure and to accompany him in his hour of suffering. Peter, who boasted of his loyalty, denied even knowing Jesus when he was confronted by the servants in the courtyard of the high priest. The other Apostles fled from the garden and hid on the night when Jesus was arrested. Only the “Beloved Disciple” joined the women at the foot of the cross. The Apostles must have asked, “Where do we go from here?” after their failure to understand the divine revelation unfolding before them.

Today’s scene from the Last Supper shows the disciples’ anxiety that they weren’t prepared for what would come next. They did not follow Jesus to his death, and after his resurrection they had to have their eyes opened to recognize that Jesus was alive and had been transformed. The risen Christ was Jesus, but in a form so new and transcendent that encountering him defied their sense of reality. The Gospel story begins with God’s forgiveness for the failure of many of its first witnesses.

John’s Gospel, also known as the “Gospel of the Beloved Disciple,” emphasizes that the mystery of Jesus’ transformation can only be known in a relationship with him. Only if we remain in his love will we know the way. Jesus promised to prepare a place for them, but it was not just in heaven. It was the indwelling of God in their hearts. The disciples received the presence of the Trinity at Pentecost. They experience what Jesus had experienced all during his life. They hear the Father’s voice and feel the active presence of the Holy Spirit. They put on the mind of Christ.

“Do not let your hearts be troubled.” Jesus says. He calls us by name, incorporating us into his crucified and risen body. Jesus himself is the Way, the Truth and the Life. There is no map or program to follow, no script to memorize, no routine to fulfill other than this.  Only a personal, intimate relationship with Jesus will keep us growing and changing until we become like him. Only love will make us other Christs and instruments of his Shalom in all our relationships. Where do we go from here? To Jesus, again and again in prayer and in our daily discernment and activities. We now live the prayer: “Lord, show us the Way.”

Column | I am the Way

Sixth Sunday in Ordinary Time: Among the first to witness

Sighting the kingdom in Minneapolis

I want to see