If I forget you 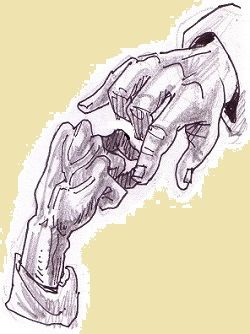 The scene in the synagogue is a set-up.  Jesus’ opponents have placed a man with a withered hand in the crowd to see if Jesus will heal him so they can accuse him of breaking the sabbath law of rest.

Luke’s use of the story is also a set-up to show that Jesus was not a lawbreaker but a fulfiller of the deeper law of love. The scribes and Pharisees are again cast as heartless villains in what was an ongoing quarrel between the early church and the synagogue party of rabbis who had expelled the Jesus sect from Judaism after the destruction of the temple in 70 CE.

It was a serious quarrel because up until that time, the Christian church was still largely Jewish and had been accepted in the Temple community as one of many variations of orthodox believers, including Gentile admirers of Judaism who observed its feasts and laws. To be expelled in the aftermath of the Roman-Jewish war was a crisis for the Christian church, which was still absorbing Gentile converts from the missionary efforts of Paul and other evangelists.

Luke dramatizes the debate to defend Jesus’ orthodoxy and also to build a deeper connection between his teaching and the original call to fidelity that the Jewish leaders had forgotten in advancing their narrow, legalistic version of God’s Covenant.  Every detail in the story is important,

The poor man selected as a pawn in the synagogue is suffering from a withered hand. We are reminded immediately of Psalm 137: “If I forget you, O Jerusalem, let my right hand wither.” The speaker is a captive during the exile in Babylon, longing for his homeland. When he is asked to sing one of the songs of Zion, he vows to never forget the holy city and the Covenant God made with Israel.

In the context of Luke’s story, it is this promise that Jesus keeps by healing the man with the withered hand. The leaders who are rejecting Jesus have forgotten God’s covenant, and because of this their faith is withering.  By making the sabbath law more important than the law of love, they are choosing death instead of life. Jesus tells the man to “stretch out his hand” to show what they must do to find wholeness again.

The story ends with Jesus’ enraged enemies plotting to dispose of him. They will succeed, but even in that, they will end up revealing and fulfilling God’s plan to save Israel by the death of the Passover lamb fulfilled by Jesus. The church is the path forward because Jesus fulfilled both the Law and the Prophets by his sacrificial death.

We never stop growing as disciples. The source of our formation is never to forget that love is the heart of our faith. Love is the first commandment. Even if we have to “stretch” our discernment to put compassion before rules, this flexibility is what real life feels like, and it is far better to err on the side of love than to have our hearts wither from disuse or narrow, cautious fear of making a mistake.

Column | If I forget you

Get back: a trip to the Andean town I once called home