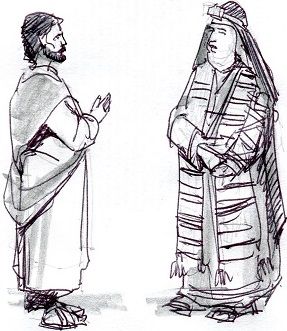 “Unless your righteousness surpasses that of the scribes and Pharisees, you will not enter the Kingdom of heaven” (Matt 5:20).

Jesus proposed a moral integrity from the inside out. His opponents were legalists who measured righteousness by external acts, regardless of a person’s interior condition.  By their standards, a person could harbor motives and attitudes of anger, lust, resentment and jealousy and still be righteous if they kept the letter of the law. It was for this disparity between inner and outer, substance and appearance, that Jesus accused them of being hypocrites, evil masquerading as good, pride hiding behind piety.

The Beatitudes addressed this directly: “Blessed are the pure of heart for they shall see God.” Without interior purity, even a religious leader was spiritually blind. The so-called doctors of the Law did not know God, so their public holiness was a façade, like whitewash on a sepulcher holding corruption. Jesus warned his disciples not to be fooled by status and appearances.  Their righteousness had to begin with interior conversion.

He gives examples.  Murder begins in the heart, where anger takes control and festers until it explodes in violence.  Disdain for another that erupts in verbal abuse kills our ability to approach God in prayer.  Unless these interior dispositions are addressed and dislodged, we are rendered unable to offer public worship. Jesus describes the spiral from anger to resentment to hatred as entanglement in an offense that goes to court, before a judge, then to jail, where we are confined in our own bitterness until we settle and pay a fine “to the last penny” to gain release.

This parable describes perfectly the self-imprisonment caused by unresolved conflicts. Family quarrels pit siblings against one another for years, each one nursing their case against the other until no one can remember what the original offense was about, leaving wounds that never heal and hearts hardened by victimhood and pride right to the grave.

Conversion sets us free to live without posturing, able to laugh at ourselves. Humility liberates us from self-righteousness, able to admit mistakes, apologize and move on. We can be generous with ourselves and with one another, ready to forgive and not too proud to ask for forgiveness.  This was the Gospel Jesus was offering the scribes and Pharisees, to come down off their high horses, be compassionate with sinners because they, too, were sinners in need to God’s mercy.

Lent ought to be a reflective and even sober time, but we should not forget that its goal is freedom and joy.

His name is John

All belongs to God

I guess I think God still has a plan for me