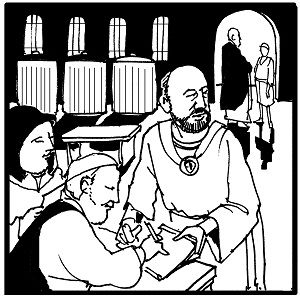 Pope Francis recently addressed some of his American critics who say he has compromised church teaching on marriage and divorce and on who can receive Communion. They say his pastoral approach to guiding irregulars is too lenient and that he has confused the laity and diminished the authority of bishops and pastors to enforce the laws of the church. The pope’s critique of global capitalism, income inequality and exploitation of workers has also upset wealthy donors to church projects and the bishops who depend on their support.

It may seem odd to think that Pope Francis is being faulted for promoting Gospel values of justice and mercy, but see in today’s readings that Jesus was also criticized for being too lenient with sinners, for reaching out to the poor and those regarded as outcasts for not observing the Law. Luke presents us with a parable that seems to address such criticisms about a steward accused of the same negligence Jesus was being criticized for.  The brilliant twist in the parable is that the extravagant and crafty steward may be Jesus himself.

Faced with expulsion by his rich boss for giving away the store, the steward cuts deals with each of his master’s debtors. Surprisingly, the rich man commends the steward for showing worldly prudence often lacking in spiritual people. It is shocking conclusion to a story that has been misinterpreted as blessing dishonest business practices. The point of the story is that Jesus was in fact representing God by being merciful with sinners, God’s debtors.

This is the same message we find in the radical approach Jesus often took toward sinners, searching for lost sheep, refusing to judge and seemingly letting everyone off the hook. He came not to condemn the world but to lavish God’s unconditional love on everyone, especially sinners and the outcast.  It hardly makes sense to those who see the purpose of institutional religion as keeping order and punishing those who fail to obey the rules.

This does not mean that sin has no consequences or that God does not care about human evil. Sin and evil lead to death, and malefactors create chaos and suffering in their own lives. God does not need to add punishment to the alienation and misery people bring on themselves by being dishonest and selfish.

What Jesus and Pope Francis represent is the merciful face of a loving God seeking to bring people in from the cold, back to the dignity and innocence they still possess as children created in the divine image.

Pope Francis: God's word is 'a love letter to us' to be read every day

Imitate Jesus and reach across the barriers that separate us