The knock at midnight 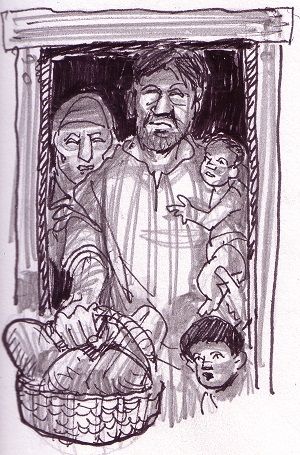 In 1962, Dr. Martin Luther King Jr delivered a sermon titled “A Knock at Midnight” in which he challenged the Christian churches to respond to the plea for the bread of justice.  It was based on the parable we read today from Luke about being persistent in prayer.  The man seeking bread from his friend at a most inconvenient hour persisted despite rebuffs because hospitality for a surprise guest was paramount in Jewish culture. He was eventually answered because the man in the house also knew this obligation and finally roused himself to provide what was needed.

It was a timely and stinging message in 1962, when churches that should have responded to the call for civil rights were hard to rouse and slow to respond. King persisted because the cause was just and the time was late, and he knew that other conscientious pastors in the white churches also knew that his knock at the door was God knocking.  At that time and, sad to say, still today, Sunday morning remains the most segregated hour in America as black and white Christians gather to pray in separate communities.

King’s persistence was inspired by his belief that Jesus’ parable was not just an ideal; it was God’s promise that justice would prevail even if resisted and postponed.  King also knew that most prophets did not live to see their prophecies fulfilled. Six years later, in 1968, he delivered his last sermon, telling a crowd of striking sanitation workers in Memphis that he would not get to the Promised Land with them but that as a people they would get there. The next day he was murdered on a motel balcony by a white supremacist.

We are reminded now in uncertain times when our future is threatened by multiple global and national crises-- economic, social, political and medical— that change does not happen without persistence. Even prayer needs the collective will of a society to accept what God wants to give.  If enough people reject God’s plan, it will remain only a dream that must be brought to life again by more activists, including prophets and martyrs. For us to miss this chance at fundamental change in America would postpone needed progress and turn opportunity into tragedy.

We have passed the eleventh hour. It is midnight. There is a knock at the door. Now is the time to rouse each other to respond. If grace meets persistence and breakthrough triumphs over breakdown, church bells across America will proclaim a new day and a more hopeful path than the one we have been on.

Column | The knock at midnight

Humility not about being polite, but accepting humiliation, pope says