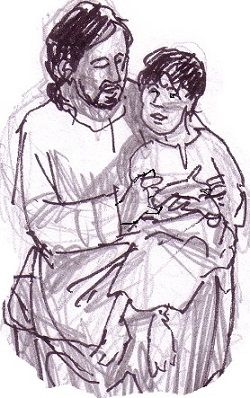 “Unless you become like children, you will not enter the Kingdom of heaven” (Matt 18:3).

Jesus surely observed how cultural forces at the time put children last. They were the most vulnerable and dependent members of society, producing little while needing everything. Adults competed for status and resources, and those who had power, education and money were highly regarded. Children were non-entities.

Jesus reversed the social order by saying that the first would be last and the last first, that true greatness was found in humility. He prized children for their innocence and simplicity and held them up as examples of humility. He praised his heavenly Father for revealing to children what was hidden to the wise and learned. When his disciples tried to keep children away, Jesus welcomed them, embraced and blessed them as precious in God’s eyes. One measure of the character of a country is how it treats children, and this is highly relevant for us in the United States.

In today’s Gospel, Jesus says that children have angels whose faces are always turned to behold God. There exists a direct link between the innocence of children and the holiness of God. To despise a child is to cut oneself off from God.

Matthew adds to this teaching about children the parable of the lost sheep.  The radical claim of the parable accentuates the common disregard for children as less important, even expendable, like the one lost sheep out of a hundred. It made little practical sense for a shepherd to leave 99 sheep in the hills to go search for one stray. Yet God has a preferential love for the little ones, the lost and the poor of society.

It is this kind of love that will get an adult into the Kingdom of heaven. Compassion for the weak and vulnerable connects us directly to the mercy of God. It opens the face-to face channel with God that angels provide, making us children again in our faith, dependence and humility. This renewed innocence and simplicity is the joy of the Gospel.

Today’s Word draws our attention to our borders and to the plight of children left behind after large immigration raids, and to those children still separated from their parents in earlier detentions and deportations. The alleged risks migrants pose to our national security pales in comparison to the risk we face as a nation of being separated from God by policies like these being executed in our name.

El Paso Diocese gets ready for rendezvous with Pope Francis