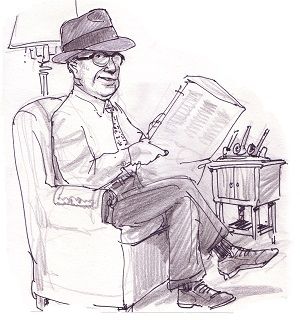 “What profit is there for someone to gain the whole world yet lose forfeit himself?” (Luke 9:25).

My late father grew up in the era of Fulton J. Sheen and Fr. Smith Instructs Jackson, a 1950s compendium of Catholic answers to questions posed by straw man non-Catholics, agnostics and atheists. A good Catholic was to be ready to respond to attacks on the faith or to turn a wavering soul into a convert. A man across the alley was Dad’s chance at a jewel in his heavenly crown. So, Felix was invited over for coffee, a game of chess and the “speech.”

We listened from the other room and could tell at the rising timbre of his voice that my father was about to spring it on him once Felix was rendered helpless by cordiality.  It was apologetics at its best, mixed with my father’s natural gifts as salesman and storyteller, and it always ended with the quote from today’s Gospel: “What does it profit a man to gain the whole world and lose his immortal soul.”

Those words, in the context of that childhood memory, still send a chill down my spine. I imagine life’s pleasures, power and riches (all that candy) piled up before me, reaching out to possess me, only to find myself hurtling into the pit of hell, my immortal soul lost forever.

We begin the season Lent with less theater and perhaps a more nuanced understanding of the “fundamental option” we gradually choose by seeking or ignoring a relationship with God and a conscious focus on what will take up our time, attention and energy. Human maturity and spiritual growth require the same sincerity and effort and, in a real sense, all paths lead to the ultimate reality. Being a serious atheist or amoral person takes a lot of work, but it is a choice. The greater danger for most people is to simply drift in a half-life of reacting rather than choosing, never getting around to setting goals or taking themselves seriously as seekers.

Jesus was also a good storyteller and a bit of a salesman, and he sets us up to decide in our hearts if we will follow him. Talk of the cross can be unsettling, but I think what he meant was, “Shoulder the weight your own life and see how challenging it is.”  Anyone who has ever played chess knows this. If you agree to play, everything is one the line, win or lose. How may people just say, "I don't play chess."

I can picture my Irish father and our next-door neighbor Felix, both gone now, having coffee after a hot game and congratulating each other on getting into heaven.

A whole universe, but inside, not outside