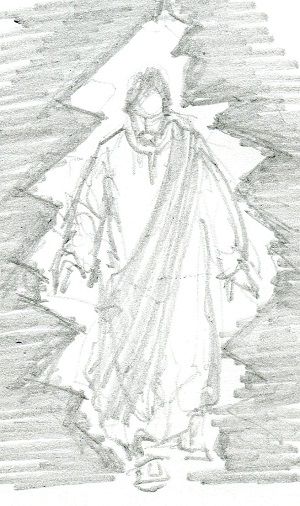 Chapter 8 of the fourth Gospel begins with the story of the adulterous woman Jesus saves from being stoned, and it ends with the words, “They picked up stones to throw at him.”

Throughout the chapter, Jesus has been debating with his critics about who he is. His claim to be one with God, his Father, will in the end be the basis for his condemnation by the Sanhedrin for blasphemy. As they threaten to kill him, Jesus asserts that anyone who believes in him will never die.  The confrontation comes down to a question of life and death.

Isn’t this the central question of religion itself? Can what we believe and how we worship and live save us from the grave? The idea of resurrection was a late development in Jewish thought. The party of the Sadducees rejected it because it was not in the Torah. Only later did it appear in the Psalms, some of the prophets and in the Book of Maccabees.

For most of Hebrew history, immortality was achieved through progeny. You lived on in your children. Abraham, the father of the faith, was assured by God that his descendants would be like the stars of the heavens and the grains of sand on the seashore. Even though he was old and “as good as dead" (Heb 11:12), Abraham trusted God’s promise.

Jesus says that “Abraham rejoiced to see my day,” meaning that his faith enabled him to see down through the long genealogy in which the Christ would appear.  More than this, Jesus affirms what the fourth Gospel proclaims from the first words of the prologue: “In the beginning was the Word.” Because he is the Word of God, Jesus pre-existed Abraham: “Before Abraham came to be, I AM.”

It is for this blasphemy that they picked up stones. Jesus is as good as dead. Yet from him, and specifically from his death on the cross, he will be the life of the world.

The fourth Gospel, sometimes called the “Gospel of the Beloved Disciple,” is both narrative and a profound, mystical reflection on Jesus as the Incarnate Word, God present with us in human history.

As we approach Holy Week, we too must become beloved disciples in order to enter the central mystery of God’s plan to save the world by love. Everything Jesus says and does is motivated by love. He will die for his friends, but even more startling, he will lay down his life for those who are picking up stones to throw at him, for those who gather on Golgotha to celebrate his death.

Now is the time to deepen our faith, for what is at stake during Holy Week is a question of life and death. What was promised to Abraham and to his descendants has also been promised to us. Do we believe this?

For receptivity to the impossible, we fervently pray

Reconciliation as a means to rebuild society