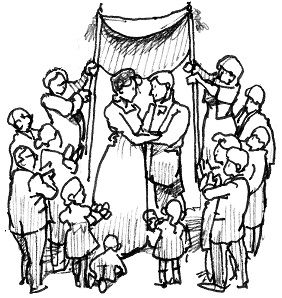 Today’s Gospel shows that even in Jesus’ time the question of marriage and divorce was controversial.  The Pharisees posed the question about divorce to draw Jesus into that controversy, forcing him to either defend marriage or accept the teaching of Moses allowing divorce. Jesus does not dodge the dilemma but defends the radical ideal of marriage from the Creation story.

He rejects accommodations that allowed husbands to dismiss their wives with a simple bill of divorce. He affirms Genesis, which declares that the nuptial bond makes husband and wife one flesh, a new being blessed by God. On this ideal rests the stability of family, the survival of the tribe and the witness to the fidelity of God to Israel.

Like all ideals in biblical history, which includes polygamy, royal harems, deception and adultery, the ideal of God’s mercy also flows like a river through the desert of human failure. Reflected in church practice, annulments acknowledge that not all marriages are valid for lack of freedom, understanding and maturity, and that when marriages fail, people need to get on with their lives for their own sake and the sake of their children. The ideal is preached, the pastoral reality is addressed, and the requirements of both justice and mercy are balanced and met.

The death of a love relationship and a failed attempt at marriage are cause for deep suffering, but life is not ended. Where sincere people are doing their best, they deserve respect and the support of the community. If truth and reconciliation have healed the aftermath of wars and social divisions, the church can also reflect the full teaching of Jesus by attempting the same with the delicate and intimate issues of divorce and remarriage.

The Synod on the Family in 2014 delved deeply into these questions, and Pope Francis emphasized the role of pastors to accompany couples as they conscientiously work through the issues.  On the difficult question of who can receive Communion, the pope has avoided legalistic approaches on this and other situations by affirming that the Eucharist is not a prize for the good but medicine for sinners, who happen to be all of us.

Death in the morning

Begin the new year with new dose of hope

The risk of faith