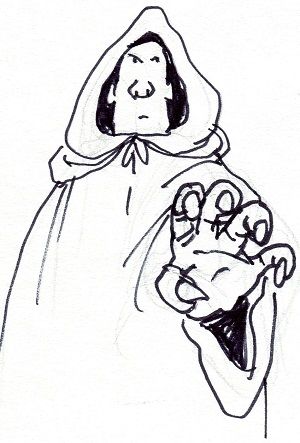 Today’s Gospel appears to be a compilation of some of Jesus’ most trenchant sayings about the need to avoid sins that can cause soul-death. For Jesus, these were so serious that engaging in them was literally what moral theologians call “mortal sins.”  They offend so deeply against core human values that they sever us from our own humanity, which in effect also alienates us from God.

The Letter of St. James describes the power of ill-gotten wealth to anesthetize the rich to the suffering of those whose labors produced their wealth. Landowners who cheated peasants of a just wage in order to finance their luxurious lifestyles were one example. Murder was another. Hardened by violence, corrupted by excess, dependent on comfort, these sinners are rendered incapable of empathy and openness to grace.  Even as they enjoy life, they die of moral indifference and lack of love.

Jesus included the sin of corrupting a child in this category.  The compulsion to seek out victims of abuse or to seduce the innocent, once it becomes habitual, has no cure except intervention.  In the first of a series of dramatic metaphors, Jesus says it would be better to be cast into the sea with a millstone around your neck than to engage in these sins.  It would be better to cut off a limb or pluck out your eye than lose your soul and end up in hell, in this life and for eternity. These metaphors have been called Semitic hyperboles, but to witness someone trapped in addiction, greed, pride and hatred reveals just how difficult it is to escape without dramatic change or rescue.

In the film “The Godfather,” a bishop uses a stone from a fountain to show Don Corleone that, though surrounded by water, the inside of a stone remains impervious to moisture unless it is broken open. Without conversion, evil resists even God’s mercy. Sin leads to the death of conscience, dehumanization and permanent alienation.

Why would anyone remain in such a mortal condition?  A homilist once told the story of a family in which the wife and mother fell into the practice of withdrawing from her husband and son at the slightest offense. A remark or perceived criticism would send her to her room, sometimes for days despite apologies. Once this behavior started, it became habitual, and the woman would brood in her self-quarantine until she felt she had sufficiently punished the others. Then she would emerge and act as though nothing had happened.  This persisted until she was reading her Bible during one of her isolations and found today’s Gospel passage. She later confessed that she suddenly realized that pride and a feeling of power had prompted her behavior and, that as she reached for the doorknob to open the door, she felt like she was cutting off her hand to finally face her husband and son again and begin to talk about what she had been doing to control everyone.

This personal story, as peculiar as it may seem, brings home the truth of how difficult but necessary it can be to change something we realize is harmful to us and others. Conversion may cost us dearly, but it is the only way to get out of hell.

At Mardi Gras, God dwells among the motley crowds

The way up is the way down