By no other name 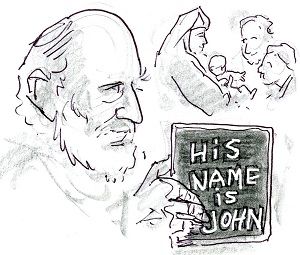 We should note that the last and greatest of the prophets of justice in the Bible was named John, which means “God is gracious.” Luke’s story of the birth of John the Baptist marks both the end of the Age under the Law and the beginning of the transition to the Covenant of Grace. There was no precedent in his father’s family for the name, but Zechariah insists after nine months of silence since the announcement by the angel in the temple that he and his barren wife Elizabeth would conceive this child, that “John is his name.”

This theme of Grace surpassing Law will be played out right up to the time of John’s beheading in the dungeon under the palace of Herod Antipas. John had been convinced that his mission was to proclaim the coming of God’s judgment like an “axe to the root of the tree” and a “winnowing fan to separate wheat from chaff.” He had offered purification in the Jordan River to escape God’s fury and even called the Sadducees and Pharisees “a brood of vipers” for thinking they could avoid punishment for their hypocrisy.

But as his life came to an end, John was filled with doubt because his fierce manner and message did not match the ministry of Jesus, who preached mercy for sinners and healing and reconciliation to anyone who turned back to God. Deeply troubled in his prison cell, John sent messengers to Jesus to ask if he was one he was supposed to proclaim or if there was another messiah still to come.  Jesus tells the crowds that John was the greatest man ever born, yet even the least disciple in the new dispensation of grace was more blessed than John.

Today the church celebrates the birth of John the Baptist. His story is about a dramatic conversion from righteousness to compassion, from rule-keeping to patience and love for sinners.  John’s journey was so total he was required to enter paradise without his head, to be reborn heart first and head last, surrendering his identity as a prophet of divine vengeance to enter glory as the evangelist of divine love.

We celebrate John because we must make the same journey. All our assumptions about fairness, personal merit and worthiness through obedience must give way to God’s inexplicable desire to offer unconditional love to everyone, saints and sinners alike.  We are to judge no one, never to compare ourselves to another nor to rank status or preference in God’s eyes by our own measure of who is good or bad. Only God can do this and has chosen not to, but loves everyone, even those who refuse love.

No wonder John was confused by the mystery of mercy Jesus preached. The challenge of the Gospel is not to understand God’s ways but to trust and believe in them anyway.  And if we can imitate them, we will be, in Jesus’ words, perfect as our heavenly Father is perfect.

Column | By no other name

Let love be the only thing you are in debt for

The sheer delight of leaping