The primacy of Mary Magdalene 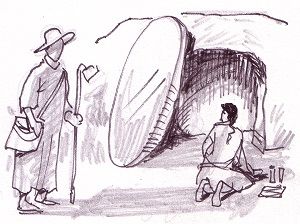 “Mary Magdalene went and announced to the disciples, “I have seen the Lord” (John 20:18).

Scripture scholars agree that the first recorded account of Jesus was the story of his death. So the tradition that evolved into the four Gospels began with the Passion, the event that made the deepest impression on his followers. Some scholars suggest further that its original form may have been a dirge  sung by women based on the experience of those who had witnessed Jesus’ crucifixion. Their heart-rending lamentation preserved the event in the memory of the community before the first preachers and then the first evangelists attempted to articulate the kerygma, or full proclamation of the meaning of the death and resurrection of Jesus.

If so, the details of the Passion were a precious part of the tradition, and among them, appearing in all four Gospels, are the names of the women who witnessed Jesus’ death, his burial, the empty tomb and the event we call the Resurrection. At the head of the list of these women is the name of the woman we celebrate today as St. Mary Magdalene.

So important is this woman to the Gospel tradition that the church now acknowledges her as “the Apostle to the Apostles.”  With this designation, the church admits that the message and mission it proclaims began with and is anchored by the testimony of Mary Magdalene, a figure so close to Jesus that he chose to reveal himself to her before any other recorded witness.

All of the theologies that try to explain the mystery of Jesus must take this into account. Every structure and institutional practice that defines the life of the church, its leadership and ministry, derive from this original authorization, and must be examined in the light of Jesus’ selection of Mary Magdalene to be his primary evangelist.

This is why Mary Magdalene is so important, even if we are hard pressed to find her influence in the ways of the official church. But her witness is there, immutable and undisputed in the New Testament, a mystery waiting to be more fully understood, then implemented as well as celebrated.

Spirituality | The primacy of Mary Magdalene

An ancient tale, in poetry and song, reveals the mystery

Work of the people

Responding to his voice

'Great misunderstanding' seen on church's teachings on end of life