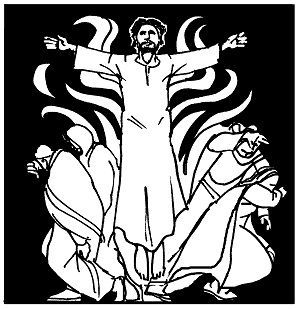 Among the steady flood of news stories about the pandemic was this unsettling report, that security has been assigned to Dr. Anthony Fauci, the straight-talking expert on contagious diseases serving on the President’s Covid-19 task force, after receiving online threats from conspiracists upset by his comments. The 79-year-old doctor has emerged as a household name for injecting science into the unfounded and premature optimism coming from the President.  For this realism he has been characterized by some as a “prophet of doom.”

The Prophet Jeremiah owns the title for his predictions of the fall of Judah to Babylon. He was the focus of vicious intrigue and frequent incarcerations and abuse for refusing to join the court prophets in political spin and their fawning sycophancy to Judah’s king, who was relying on foreign alliances instead of God’s word. Jeremiah is honored as a model of the authentic prophet.

The fourth Gospel applies this experience to Jesus as his enemies attacked him for claiming to represent God as a prophet but also as God’s Son. They had finally found cause to condemn him on theological grounds and thus silence his more immediate demands for social justice for the poor and his criticism of the temple priests, scribes and Pharisees for their hypocrisy and harsh interpretations of the Law misrepresenting God’s mercy. Jesus’ popularity and compassion for society’s marginalized was undermining their credibility and official status, and they found him intolerable.

As is often the case, religious figures who stay in their spiritual roles are ignored while more prophetic voices are accused of engaging in politics and meddling in economic issues. Pope Francis has attracted opposition for his exhortations on climate change and calls for global justice. Dr. Martin Luther King Jr was lauded as a preacher but accused of being a communist when he condemned the Vietnam war and protested for economic justice. Sister Dorothy Stang was not murdered in Brazil for her charitable work but for defending the Amazon from destruction.

Jesus brought the full authority of God to his radical message of conversion. His Sonship was revealed not just by his words but in the signs that validated his claim to be the human face of divine Mercy, to be anointed by the Spirit of the Lord to bring Good News to the poor and freedom for the oppressed. Jesus is the authentic model that inspires and authorizes other sons and daughters of God to build the Beloved Community on earth.  They pay a high price for their audacity, and they also set the standard for the rest of us who call ourselves disciples.

Blessed are those who need security assigned to them for their forthrightness and integrity.  May angels watch over them, for, like the Master, they are the children of God.

Contemplating the Reign of God

Who is my neighbor?

Statement guides me on my mission