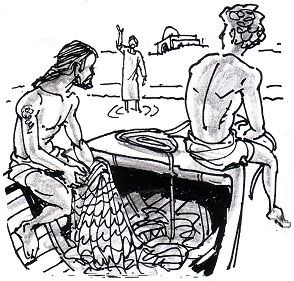 Jesus begins his ministry in Capernaum by the Sea of Galilee. His first disciples are all fishermen. The setting and the activities of fishing, boats and nets take on significance as preparation for their mission to attract others to Jesus. Their skill at catching fish describes their future role to “catch” people.  But first they are themselves caught by Jesus, whose look of love seems irresistible when he passes by and says, “Follow me.”  They immediately leave their boats and the future they had thought was theirs fishing on the Sea of Galilee.

Today’s reading from Romans is also about the call and mission of Apostles. St. Paul had the same skills for attracting people as the first fishermen. He had been captured by Jesus, and he knew how to cast a wide net that drew audiences of his preaching into small faith communities that launched the early church into the Mediterranean world.  He describes how the Gospel spread from preacher to listener, entering imaginations, then hearts, moving converts to confess their faith in Jesus. Each conversion creates another witness who extends the network of discipleship, catching others who in turn catch others.

Personal stories of conversion recreate this chain of influence as people realize how they came to faith because of family, teachers, mentors, sermons, direct experiences of grace in times of suffering and loss, temptation and danger.  True conversion, affirmed over time, links a believer back to the Jesus himself, who is an encounter with God, the ultimate Mystery, the soul’s homecoming and then staging area for being sent to witness.

Advent begins this cycle again as believers clear a space in their busy lives to welcome Jesus at Christmas. Jesus is again walking by, and as he passes, we hear our names called. Here is another chance to drop everything and follow him.

Column | By the sea

Once we were stardust, and what we will be is the good surprise