The secret of life 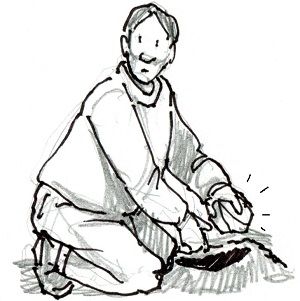 Jesus’ parable about a king who gave talents to three servants is made more complicated by Luke’s mixing it with details of an actual historical event involving Herod Archelaus, the son of Herod the Great.  When his father died in the year 4 BCE, Archelaus’ claim to the throne was contested by his younger brother, Herod Antipas, and by the Jews because of his brutality. Archelaus went to Rome to ask Caesar Augustus to confirm his rule, which the emperor did, but he only lasted until 6 CE, when he was deposed by the emperor and Palestine was placed under Roman rule.

This backdrop is significant for Jesus as he leaves Jericho and proceeds to Jerusalem for Passover and the events of his passion and death under Pontius Pilate. The theme of using the gifts God gives us is about discipleship, and it follows naturally from the story of Zacchaeus, the tax collector Jesus converts from moral poverty to spiritual riches as a disciple.

Vocation flows from acknowledging our gifts. They are meant for others and for the community through service. This is our path to wholeness and ultimate purpose.  Developing our gifts involves risk, but to withold or waste them is a sin against self and against the Giver, and a loss to everyone who was to collaborate with us in the use of their gifts.

The servants who invested their gifts multiplied their value and showed themselves worthy of even greater gifts. The servant who buried his gift out of fear is a cautionary tale and a tragedy. Disciples are called to the joy of imitating Jesus, who emptied himself into the community and led the way to our shared destiny as the Beloved Community.

Jesus' parable ends with a Zen-like paradox about using and losing. How many people fail to use their potential, then discover it is no longer there? Nothing comes from nothing.  There is no suffering like regret. We might have grown by giving ourselves away, but we held back only to discover we had missed living itself.

Jesus gave himself for us, multiplying his own life into our humanity, transforming us to share in his divinity. He invites us to accompany him to Jerusalem, where prophets die but also rise again in glory.

Column | The secret of life

Seek and you shall find