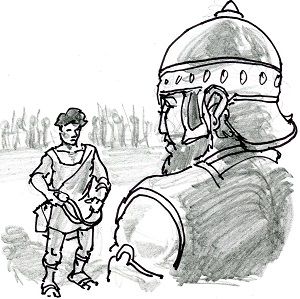 The story of David and Goliath, historical or not, is one of the more memorable Bible stories, and it has survived in popular culture and idiom as the quintessential match up of small but smart defeating big and arrogant. The Roman Army, based on a mass grave of skeletons all over 7 feet tall, is thought to have used giant shock troops to convince tribes in their path to think that the whole army was this size.  In Numbers 13:31, scouts sent by Moses to survey the promised land returned saying the inhabitants were all giants.

Goliath, the Philistine champion, sent fear into Saul’s army, but any psychological effect this had was reversed when a mere boy slew him with a slingshot.  If the gods have abandoned them, the Philistines had no chance of victory.  The story, like all of Samuel, is richly nuanced, for by killing Goliath, David saves Saul’s army but outshines Saul and soon replaces him as king.

The first reading is matched with Mark’s story of Jesus healing a cripple on the sabbath. Jesus is in effect David going up against the whole religious establishment, a Goliath of legalism and mindless cruelty in its control of ritual practice.  Prohibiting healing on the sabbath made the rabbis and priests gatekeepers to a God more concerned with rules than human suffering.  Seeing their calculated use of a cripple to trap him, Jesus is indignant. He stretches out his hand and heals the man, like the lepers he freely touched and the prostitutes and tax collectors he welcomed at table.

What really needed stretching and healing were the narrow minds and withered heart of his critics. God’s grace, like the choice wine at Cana and new wine of the parable requiring fresh skins, was being freely offered to everyone. These so-called representatives of God were the guests in another parable, too important and preoccupied with their own affairs to come to the wedding feast God was proclaiming in Jesus. As they plotted Jesus’ death instead, they were rejecting the greatest love story ever told.