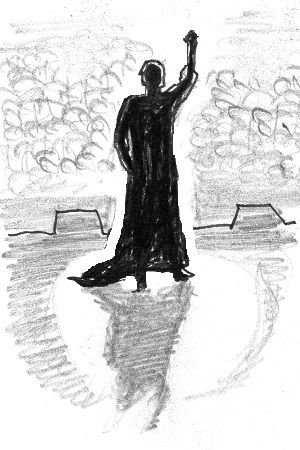 Politicians, celebrities, and other public figures know they face a media that often creates heroes, then tears them down. This is the cycle that drives public interest in a culture where news and entertainment have merged.

The story of Jesus fits this pattern. Jesus begins his ministry with phenomenal success and public acclaim. His preaching and miracles gain him a large following and his reputation spreads throughout Galilee, which attracts the attention of the temple establishment in Jerusalem. It is not long before curiosity becomes criticism as inquisitors record his heresies and legal infractions to build the case against him.

His critics note that Jesus eats with sinners, touches lepers, breaks the Sabbath and misleads the people. He is a dangerous fraud, a provocateur who is threatening the authority of King Herod and the Roman occupation with his populist dreams of peace and love. The Gospels show how Jesus - God's chosen one, the gracious source of healing, forgiveness and love - goes from adulation to hatred so quickly.

Today’s first reading from Wisdom serves as a kind of script for how people plot the trajectory from praise to vilification in their hearts when someone they have built up into an icon of perfection becomes a probe to their consciences and a threat to their flawed lives.

The just man stirs up hatred because he is just. The holy one makes everyone else seem tainted and compromised.  The honest man exposes the corruption around him. He is too good to be true, and therefore must be hiding something. Bring him down with gossip and rumors. Destroy his reputation and incite violence against him. See how he handles adversity and scandal.

Lent tells the story of Jesus’ descent from acceptance to rejection. God’s messenger to a sinful world is the Suffering Servant of the songs of Isaiah and the prophet of constant sorrow previewed by Jeremiah. Evil will not be displaced with platitudes and wishes, but only by One who absorbs the damage sin has done to the world and overcomes it by self-sacrificing love.

Jesus tries to prepare his disciples for this stunning reversal of all their expectations. He will be crucified in order to fulfill the Law and the Prophets. He will take on himself the sins of the world in order to liberate sinners from the power of death.

Our Lent is about taking up this same pattern of dying to self in order to live for others in imitation of Jesus.  This is the path to life, but it passes through the valley of suffering and discipline that alone can train our hearts for love.  This is the pattern Jesus understood and accepted as he completed his mission of acceptance, rejection and reversal.