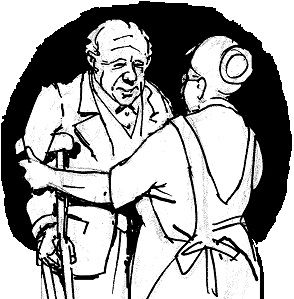 The story is told of Peter Maurin, co-founder with Dorothy Day of the Catholic Worker Movement, being invited to speak at a large parish in the 1930s. The pastor was expecting a large turnout and was distressed when Maurin, whom he had never met, had not appeared. As the event was about to start, a shabbily dressed man who had been hanging around the premises stepped up to the podium. It was Peter Maurin, who always traveled light, owned only a single suit he often slept in, practicing the voluntary poverty he was to promote in his talk.

When Jesus sent the Twelve ahead of him to proclaim the Kingdom of God, he likewise ordered them to arrive in utmost simplicity. They were to carry no traveling sack, food or money or even a walking stick, rendering them defenseless against robbers or wild dogs.  Nor were they to take a change of clothing, something that would have clearly identified them among peasants as persons of means or importance.  They were to come poor among the poor and totally dependent on their hospitality.

When St. Francis of Assisi gathered his fratelli (little brothers) around him to preach the Gospel, he understood the effectiveness of this same simplicity. The mendicant movements of the 13th Century were in response to the extravagant wealth of the church and a contrast to the official representatives of the hierarchy arriving on horseback or in carriages loaded with baggage. We might imagine the contradiction it would have caused had a well-dressed Peter Maurin arrived by limousine to talk about evangelical poverty.

St. Francis wanted his brothers to witness to the poverty of Christ, and he told them to “Preach the Gospel. Use words if necessary.”  Like disciples of Jesus, their appearance was to speak louder than any sermon. Their dependence on their hosts also left a household free to open the door or not, initiating each encounter as an act of hospitality that signaled the readiness to receive the message these strangers were offering. Those who did were blessed with peace and healing; those who did not missed the grace of the moment.

A film about Dorothy Day was titled, “Entertaining Angels,” a reference to Hebrews 13:2: “Do not neglect to show hospitality to strangers, for by so doing some people have entertained angels without knowing it.” Simplifying our lives prepares us for the Gospel, uncluttered and undistracted by possessions and the anxiety that comes with owning and protecting things. The joy of discipleship comes from realizing how little is essential to a full life and the freedom that comes from traveling light in the company Jesus.

In this darkness is there also light?