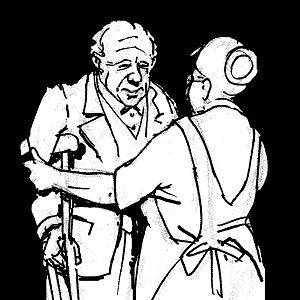 Dorothy Day’s immersion into the world of poverty and chaos in the Bowery section of New York City during the Depression involved not just serving the poor but living with them as well.  This decision to form community with a more egalitarian spirit and non-hierarchical structures led to some surprising encounters and misunderstandings.

A story is told about Day, who was engaged in a spirited discussion with one of the guest residents at the Catholic Worker House when a prominent academic came to visit.  As the visitor stood in the corridor waiting to speak with her, Day continued her conversation with the mentally disturbed woman until, finally, she turned to the stranger and asked, “Did you wish to speak with her or with me?”

The Letter to St. James calls for this kind of impartiality as the hallmark of the Christian community, especially at the Eucharist. How can we celebrate the Lord’s death and resurrection if we do not take the paschal pattern of his sacrifice into our own attitudes and actions?  How can the church witness to Jesus if it ignores the poor and the homeless while cultivating wealthy donors and giving special treatment to some parishioners over others?

In today’s Gospel, Jesus polls his disciples on what people are saying about him. His preaching ministry and miracles have raised expectations that he might be the Messiah or the return of one of the major prophets signaling End Times.  The disciples have seen Jesus’ power and have been discussing among themselves their own role should he prove to be the glorious Messiah.  Peter sums up the group’s view by saying that Jesus is the Christ.

But when Jesus begins to describe what awaits him in Jerusalem, Peter takes him aside to dissuade him.  The location is near a Roman shrine to the god Pan at the foot of Mount Hermon that some called the “Gates of Hell.”  Jesus, who had just praised Peter for hearing the voice of God, now rebukes him for mouthing Satan, tempting him not to be the Suffering Servant.

We can find in this crucial moment in the founding story of Christianity the two paths the church will face as it emerges in history. Will it imitate Jesus as God’s Servant or seek the glory, wealth and power the world offers those who serve its purposes? Apparently, as early as the time of St. James as leader of the church in Jerusalem, the temptation to side with wealth and power was already a threat to the integrity of the church and the Gospel.

It may seem ironic that the cause of Dorothy Day for sainthood is being promoted by one of the largest and wealthiest dioceses in the U.S. Church, proclaimed from the pulpit of its newly renovated cathedral in New York City. Day’s commitment to the poor and her frequent challenges to the official church during her lifetime on the rights of labor, the abolishing of nuclear weapons and an end to all wars offer a dissonant voice to the ecclesiastical status quo of many of today’s bishops, successors to the Apostles.

The Word of God comes to us today to be that same dissonant voice in our own lives, asking us, “Who do you say that I am?”   Which Messiah do we serve and imitate?

Pope: Evangelization must help, not hinder, people getting closer to God