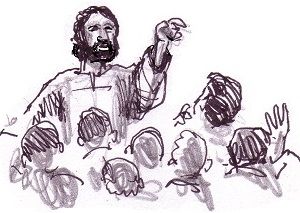 One of the first tests of a leader’s insight and judgment is his choice of companions to help him accomplish his goals. Candidates elected to office need to put together their staffs and surround themselves with trusted advisers.  Some leaders reward cronies and hangers-on, others choose with purpose and greater discernment.  President Abraham Lincoln invited many of his political opponents to serve in with him as his “cabinet of rivals,” as one biographer called them. He wanted people who would challenge him.

Jesus spent the night in prayer before choosing his apostles, so we have the sense that he chose each one deliberately. By every measure, they were an odd lot: simple fishermen (Peter, Andrew, James and John), a former tax collector (Matthew), a zealot (Simon), a doubter (Thomas), and one who was initially openly skeptical (Nathaniel), and, strangest of all, a traitor (Judas).

By personality, the apostles proved to be contentious and competitive, arguing about who was the greatest. Peter, the eventual leader, was both boastful and cowardly. James and John had tempers and connived with their mother to advance their positions. Most of them fled when Jesus was arrested and crucified.  They were slow to believe in his resurrection.

One explanation for Jesus’ choices was that he was assembling a group that represented all the human obstacles to community in order to show the power of love to transform humanity into one family capable of forgiveness and love.  He wanted his apostles to experience the adversities and challenges that would prepare them to preach mercy and reconciliation.  He chose Judas to show a love strong enough to forgive even intimate betrayal by a friend.

We may not know the full story. Narrowing the apostles to Twelve may have been an after-the-fact decision by the evangelists to show that the church was the fulfillment of ancient Israel’s twelve tribes. The lists of the apostles vary in the Gospels, and other companions, including the women, were acknowledged as part of the group following Jesus.  If this was the case, we can only imagine the many human issues, conflicts, and risks that marked the interactions of all the men and women who surrounded Jesus during his ministry. Jesus wanted the full range of humanity to show the power of grace to create unity from diversity and even enmity.

We only speculate, but the reality remains that Jesus’ choice of companions and relationships was not designed for efficiency or success by ordinary standards.  They were a hodgepodge of human promise and failure, destined to become saints and the foundation of the faith we profess.  This should encourage us that we, too, are called to be apostles who know the meaning of forgiveness and the power of God’s mercy to make us into a beloved community.

Column | We are called

The obedience of faith in the Christmas season

Remain in my love

Society profits from the power of patience