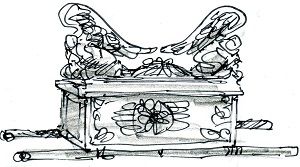 Today’s Gospel tells the familiar story of the healing of a leper, but this is overwhelmed by the other reading from the First Book of Samuel, a dramatic tale from the early history of Israel as it fights for its home in the Promised Land. I will return to the Gospel at the end of this reflection.

Today’s first reading describes the shocking capture of the Ark of the Covenant by the Philistines. After an initial defeat, the Israelites decided to fetch their most sacred relic from Shiloh and carried it onto the battlefield. But they were defeated again, and the Ark was seized. Their confidence in God had focused on an object they assumed could guarantee God’s protection.  Later defeats were to come in Israel’s history when they assumed automatic safety even though they had not kept the covenant.

The Ark itself was designed to remind them of God’s freedom. The box, containing the tablets of the Law, Aaron’s staff and some manna, was topped by a gold cover with two cherubims whose wings reached back but left a tiny space between them. God was not in the Ark or in its sacred contents but in this tiny space, a power beyond human comprehension and control.

This truth is confirmed in another story told about Titus, the Roman general and future emperor who destroyed Jerusalem in 70 CE. Eager to explore the mysterious Holy of Holies. Titus cut the veil with his sword and entered the chamber, but he found it completely empty.  God can neither be contained nor confronted by earthly power.  God cannot be kept in a box, no matter how beautiful or sacred it is.

Jesus must have witnessed some of this magical thinking when he visited the temple and saw all the ritual offerings, sacred structures and things, including gold utensils and vestments used by designated intermediaries said to be able to get God’s attention to bring about answers to prayers. Jesus’ dramatic cleansing of the temple challenged this idolatry and presumption.  His words to the excluded Samaritan woman at the well were that God was to be found in “spirit and in truth,” not on mountains or in shrines.

The Incarnation revealed Jesus to be the ultimate focus of holiness, accessible and approachable by us all through our own humanity united to his as the path to divine life. Worship in spirit and in truth is found not in places but in loving and serving one another. An elusive and uncontrollable God awaits us in the needs of others, especially those described in the Corporal Works of Mercy. Jesus is to be found in the least of his brothers and sisters, the hungry, thirsty, naked, sick, imprisoned, outcast and persecuted.

Today’s Gospel holds an additional truth for us in the story of the healing of a leper by Jesus.  When St. Francis of Assisi was first called, he obeyed Jesus’ words, “Repair my church,” by setting out physically to rebuild an abandoned chapel. But his real conversion took place when he encountered a leper and embraced and kissed him, recognizing Christ in him.  An act of ritual devotion gave way to an act of compassion so freeing and joyful that Francis challenged a whole church corrupted by wealth and power to recover the centrality of love at the heart of the Gospel.

Column | Where is God?

Down by the river